Wild, crazy, strange …all words spouting from the lips of hardcore enthusiasts across the snow-belt as we get our first glimpse at the all-new 600 Rush from Polaris. The anticipation and excitement has been building on the forums and other internet chats across cyberspace as the so-called reckoning day for the latest buggy from Polaris drew near. Polaris faithful, which have dwindled in numbers since the days of the once champion Edge chassis, along with pessimistic peeps from other brands maximized the bandwidth of this and other sites as the Polaris Rush was completely unleashed to the snowmobile world late Saturday night (Jan. 24th). 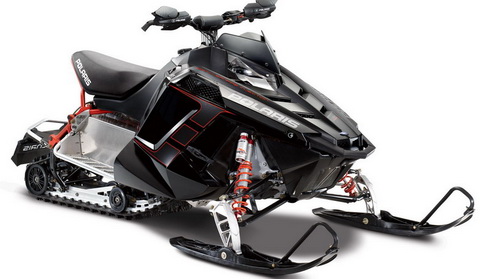 It has been six long and often times tumultuous years for Polaris and its legion of riders, who rode out the storm of first watching Ski-doo, Arctic Cat and Yamaha release new and revolutionary iron into the market; followed by the dismal release of the 900 Fusion in 2005. While Polaris saved face by transforming the IQ chassis into a top caliber chassis by 2008, the hammer blow which Polaris fans had hoped for as far back as 2003 never came… until now. 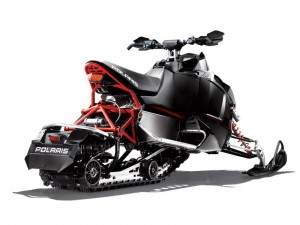 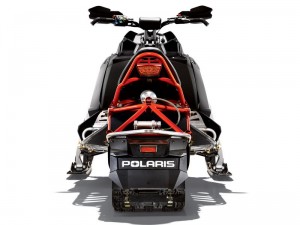 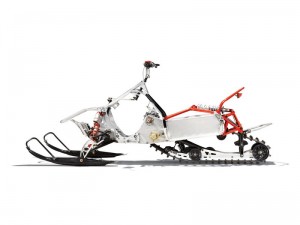 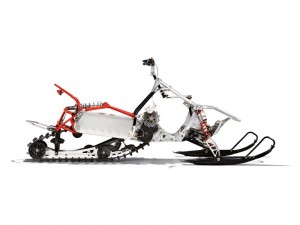 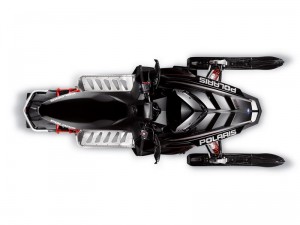 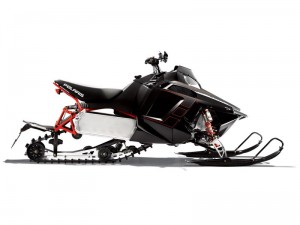 The 2010 600 Rush breaks the mold and at least on paper, appears to set the stage for another significant shift in the snowmobile industry. While the plastic is new and the chassis now cast, the dramatically wild and unique rear suspension is what clearly sets the new Polaris apart from the pack.

Dubbed the Pro-Ride progressive rate rear suspension, the new externally linked; rear arm moves the coil-over shock outside the wraps of the 1.25” Ripsaw track and in the process delivers a true progressive ratio rear suspension. For all of us who slept through trigonometry, today’s traditional skidframe is forced to compromise its rising or falling rate at some point in its travel spectrum. A true rising rate is virtually unobtainable while working within the confines of the track. By moving the shock and linkage outside the track, Polaris engineers were given the ability to develop a true progressive rate rear arm, one that increases resistance as travel and force applied increases as well. This, according to Polaris brass, dramatically improves ride quality and virtually eliminates crash-through and harsh bottoming.

Upon closer inspection, the 600 Rush is really a tale of two snowmobiles, a dramatically different one to the rear, and a conventional design at the front. The Pro-Action chassis features a two-piece cast bulkhead seamed down the center of the chassis and an over-engine steering structure, both designs found in competitive sleds. Structural bonding (adhesives) replaces more traditional rivets and fasteners to link the sub-systems together. The result should be a chassis with much improved torsional rigidity versus the IQ, which in turn should spell improved ride and handling. The front suspension is a pick-up from the 2009 Dragon SP models featuring Walker Evans shocks, improved sway-bar and machined spindle. The geometry is identical as well too, a smart move as this is the best front suspension in terms of ride quality in the business.

The curtains don’t quite match the carpet – the styling of the new 600 Rush is radically different and naked at the rear, but somewhat me-too and more finished at the front.

To accommodate the new Pro-Ride skidframe another over-structure had to be developed, this time under the Rush seat. Hovering just above the dramatically shortened tunnel, X-tubing is the focal point of force being generated by the massive Walker Evans remote reservoir rear shock. This substructure is also tied to the front over-structure, making for an incredibly stout chassis design.

Power comes from the proven Liberty 600 twin, perhaps the best engine in the Polaris stable. However it’s only a two-injector design, which according to our 2008 specs produces 5-horsepower less (120hp) than its four-injector sibling (125hp). Other traditional Polaris goods can be found underhood as well, including PERC reverse and the new P2 secondary clutch found on limited models in 2009.

From the bars you’ll immediately find the Rush to be very narrow, especially compared to its IQ brethren. Running boards are wider with deeper footwells similar to an XP. But what the Rush shaves in width, it adds in what “feels” like a longer cowl and front bumper. A new multi-function display, borrowed from the Polaris ATV parts bin, greets you with an all digital display and ample functionality. Controls remain old-school Polaris, utilizing the same throttle block, brake and hand warmer control and screw in curved bar-ends. 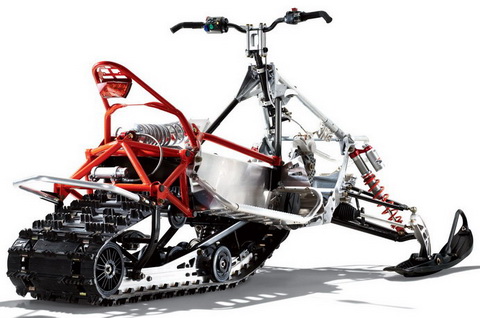 All new? The new Pro-Ride rear suspension, while a radical departure from what is found lurking under every other current snowmobile tunnel today, is amazingly similar to a rear suspension found on a machine in the mid-80’s.

Breaking the rules is a game that has been played over and over again in the snowmobile industry. Snowmobile historians can point to countless models and designs, which have attempted to change the rules and subsequently conquer the awareness and ultimately the pocket-books of snowmobile consumers.

Changing the rules of how a rear suspension operates has also been tried countless times, even in the arena of rising rate. During the early 80’s models from both Arctic Cat and Ski-Doo featured outboard mounted coil over shocks at the rear; while more recently aftermarket designs such as the AD Boivin skidframe or the failed Redline, attempted to change the suspension game. Unfortunately more often than not, the game refuses.

To date the Max Sled staff has had very limited time aboard a pre-production 600 Rush, so we’ll hold judgment on its true capabilities. But we are convinced the Pro-Ride chassis and suspension has the potential to become a breakthrough model and moment in snowmobile development. And as we log more miles in the months to come, and as riders across North America experience the Rush through the efforts of an extensive Polaris demo campaign, the true potential and impact will become more in focus. 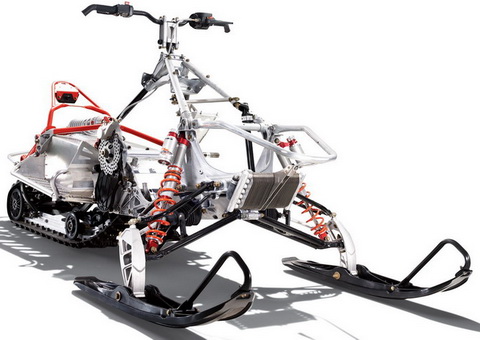 Exposed to the bone, the new Pro-Ride chassis shows off it amazingly clean level of fit, finish and manufacturing prowess never before seen from the Roseau plant. Note the trick front mounted cooler and externally mounted driveshaft brake.

For Polaris the new 600 Rush will entice the cards to flop in their favor. The Rush is a dramatic departure for a company that has built its snowmobile heritage by improving existing ideas and bringing them to the masses. This time Polaris itself has changed its own game and the result is a new model which has captured the attention of the snowmobile world; now it’s up to time itself to be ultimate judge.

Pat Bourgeois is a nineteen year veteran of the snowmobile and powersports industry. He grew up in far northern Minnesota within the shadows of Arctic Cat, Polaris and the now defunct Scorpion brands. After graduating with a degree in journalism and public relations he served as Managing Editor for Minnesota Snowmobile and Supertrax magazine for nearly 9 years and later worked for Harley-Davidson Motor Company and most recently at Polaris Industries as the Marketing Manager for their snowmobile division. Pat currently owns a private marketing and media relations company and remains actively involved within the industry by lending his expertise to the new International Series of Champions (ISOC) National Snocross sanctioning body, Extreme Motor Park in Elk River Minnesota along with offering his extensive evaluation and editorial skills to select media outlets including Maximum Sled.