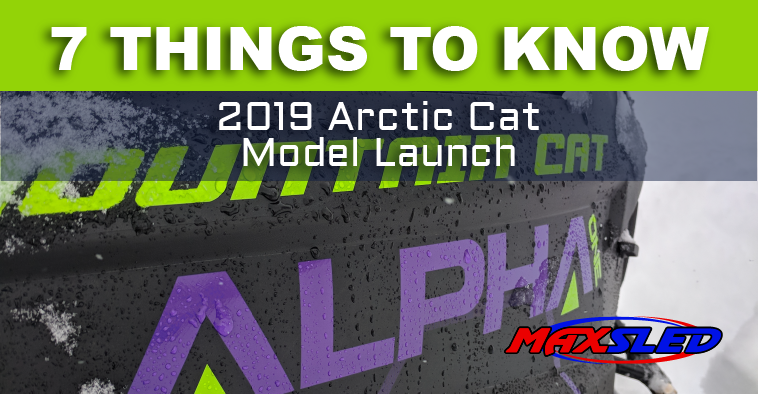 Textron President Scott Donnelly spoke at the first combined dealer meeting since his company acquired Arctic Cat just over a year ago and laid out the best possible message a consumer could hear. “Our company is all about product,” he said. “New products matter. We’ve been in the vehicle business. Arctic Cat is a great company, but, frankly, is a company that has not made enough investment in new products.”

Donnelly later explained the absolute scale of what he is used to in terms of investment. “Textron spends a little over a half a billion dollars a year in new product investments,” he said. That’s a darn hefty number to be socking away into R&D. While that doesn’t all get plugged into snowmobiles, he did tell the dealers in attendance that whether it’s the platform or the engines that power them, “you’ll see more investment in new products to be wildly successful.”

So, let’s take a peek at 7 of the most interesting things we know about the 2019 Arctic Cat lineup so far… 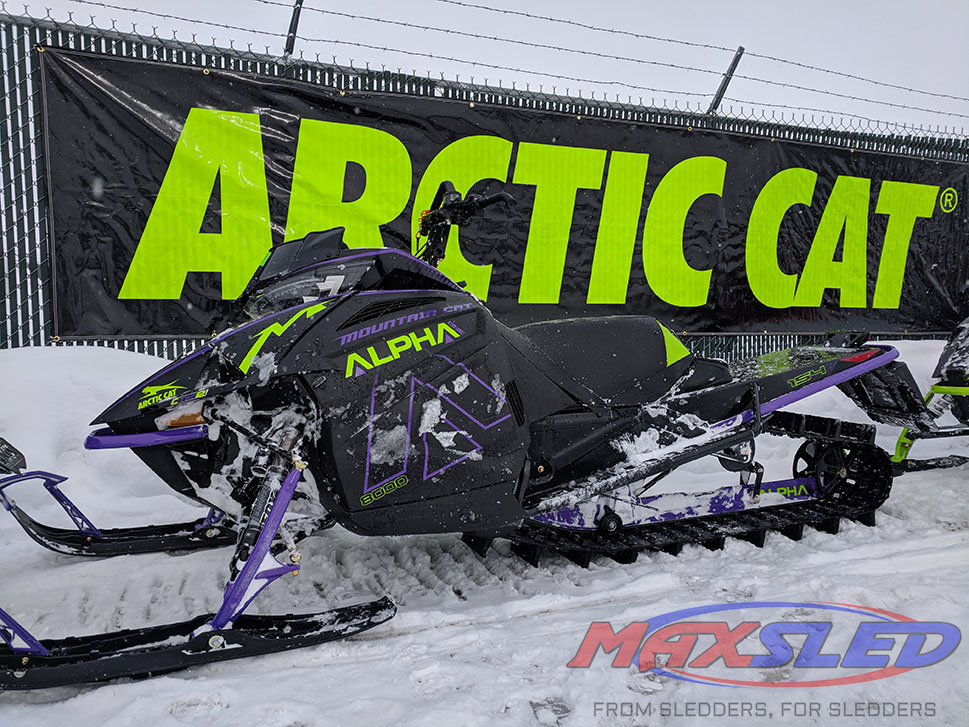 The mountain segment has been specifically focused on function and weight since day one. The Ascender platform, launched last season, handled the function. Narrower body work and tighter packaging allowed the sled to roll up on its side more easily, without hanging up on the snow and paneling out on sidehills. 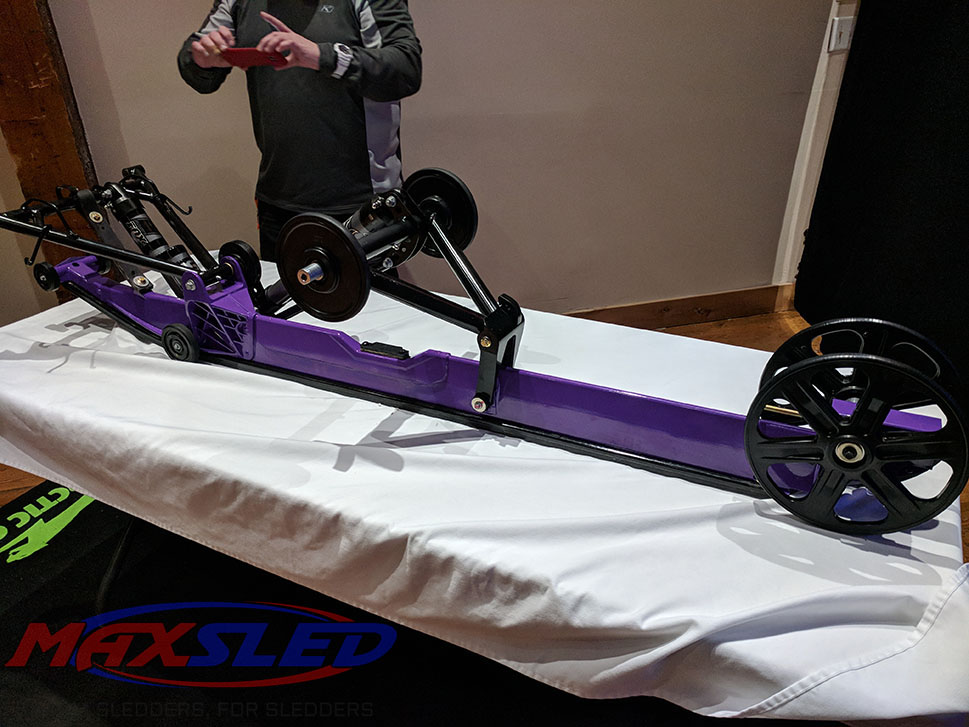 Arctic Cat upped its deep snow handling game in 2019 with the all-new Alpha One single-rail rear suspension. The design, the only one of its kind in modern snowmobiling, uses a single, triangular rail with two hyfaxes right down the center line of the sled. The result is one-of-a-kind handling and maneuverability. In deep powder and while sidehilling.

The Alpha One allows the new Powerclaw track to flex and bite the snow in a wide variety of terrain. The track has a whole new physical layout, with its driver windows located down the center. Unique 3.5-inch pitch gives the track the largest single bite of snow on the market, as well.

Overall, the Alpha One single-rail skid and the new track is said to reduce the sled’s weight by 10 or 11 pounds. But that doesn’t account for the massive amounts of snow that isn’t trapped in the rear suspension on traditionally designed sleds. As a play for improved real world running weights, the Alpha One is a huge winner! 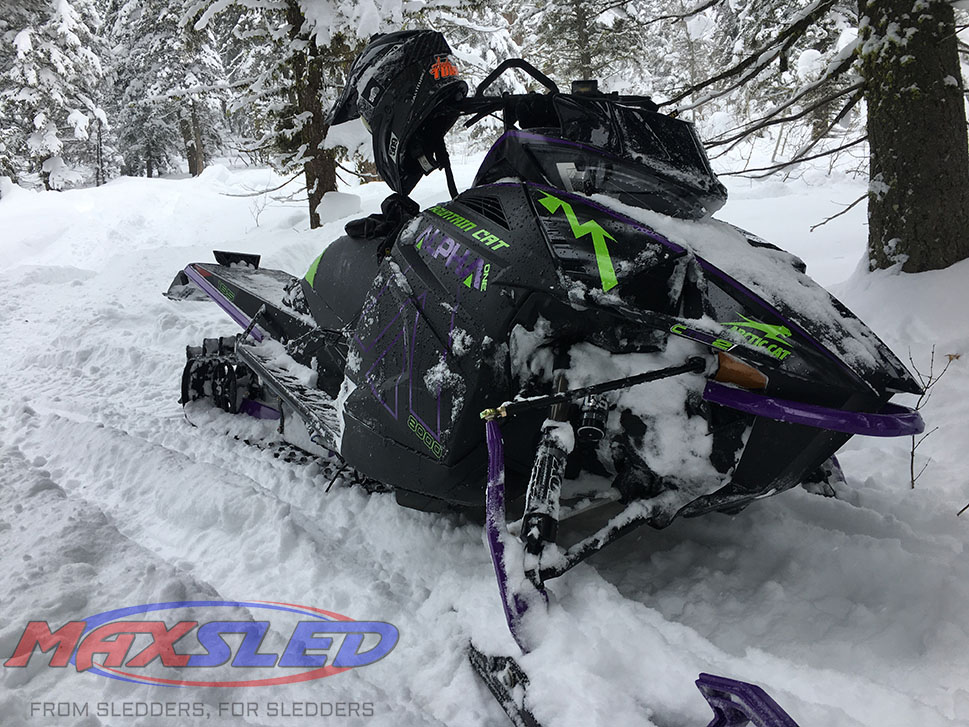 Our mountain riders had an opportunity to take an Alpha One for a rip recently. They came back more excited about that sled than any other model in the last five years. “This sled is the real deal. Box Stock, this sled outperforms expensive mod sleds in maneuverability, reliability and most importantly, it’s fun as hell!” said Jason “the Mailman” Soucie when he calmed down enough to text his thoughts back. “I loved the 2018 version when I first got to ride it last year, and the new Alpha One does anything and everything the Mountain Cat does, but better. Awesome Cat power, plus maneuverability. Cat is my solid pick two years in a row now. Great work, Arctic Cat!” 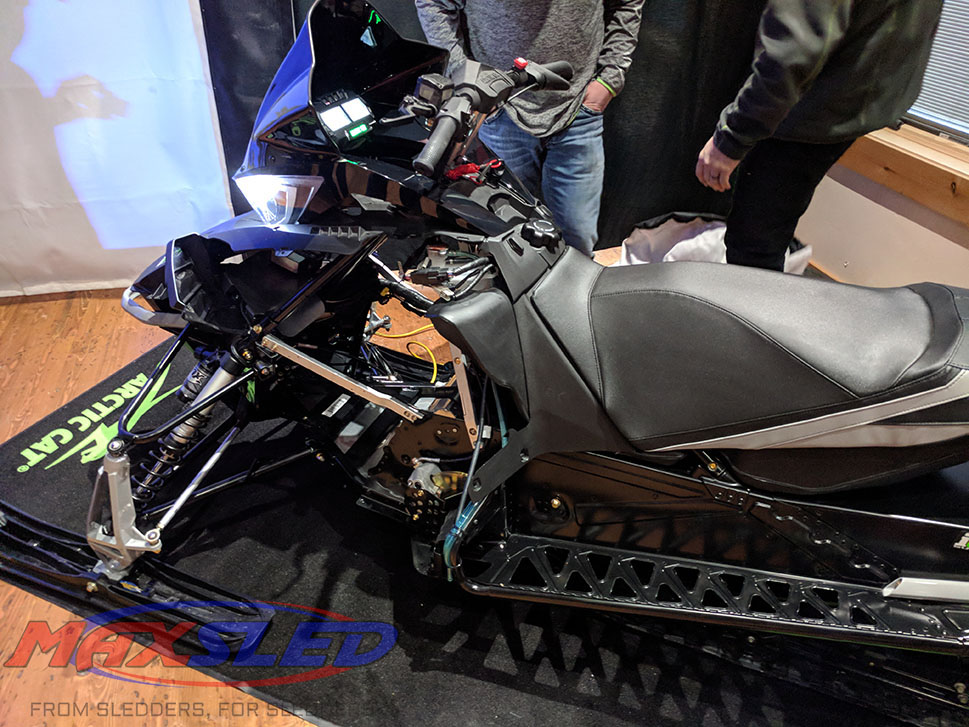 Coming into 2019, Arctic Cat and Fox worked together to develop yet another evolutionary step to the successful original QS3 easy-adjusting shock package: on-the-fly adjustability. There have been plenty of adjustment systems over the years. We’ve seen electric-motor-powered physical mount point adjustments, hand-cranked adjustments, air compressors and more. But the simplicity of the Fox iQS shock system is what makes this package so nice. 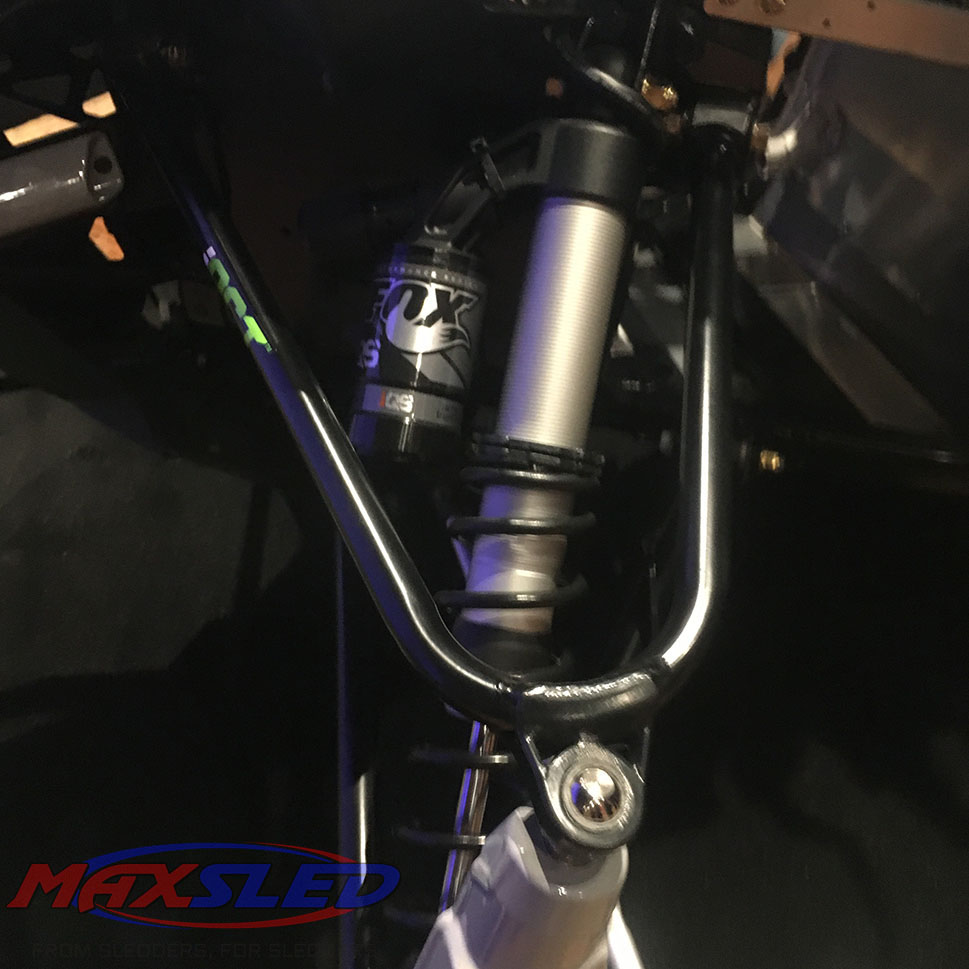 Riders simply select one of three settings, soft-medium-firm, at the left side control block. Done. Easy. No fiddling around with an infinite number of settings. It’s that same simplicity that made the market love the QS3 originally.

The iACT suspension system adjusts the front shocks as well as the rear rear shock for a great ride no matter the condition. 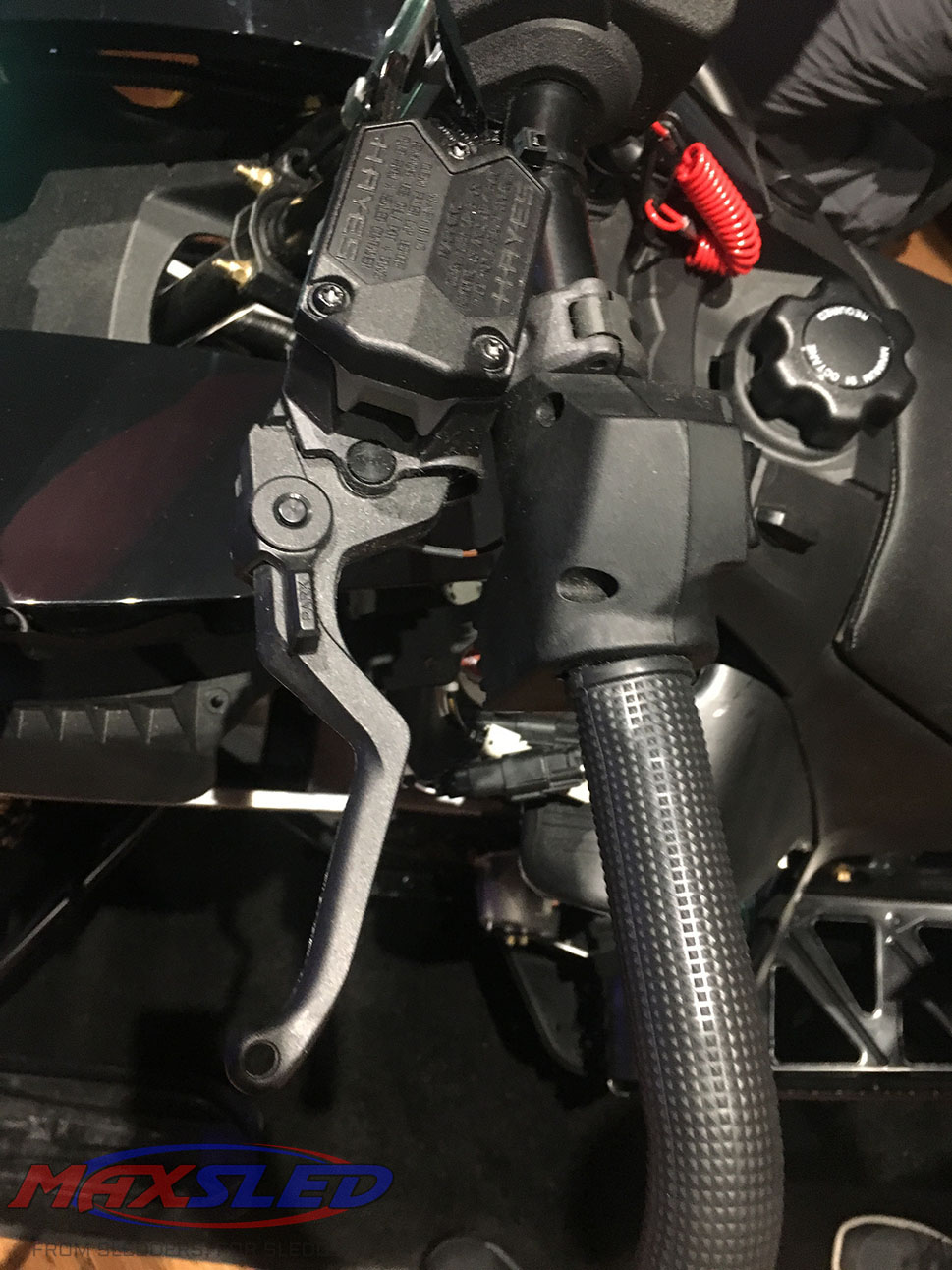 As a part of the new iACT suspension system, the industrial design crew at Arctic Cat had an opportunity to give the handlebar controls a full redesign. The left side control group is tightened up, with the hand and thumb warmer toggle set easily at the center of the control. It also displays the warmers’ intensity on the gauge.

A new push button start is located at the top, and the high beam switch is at the bottom of the pod. The iACT adjustment is also managed on the left side.

Additionally, there’s a new Hayes brake system on the left hand. The new design has a smaller lever, with a shorter throw. It’s also very easy pulling when the time comes to settle down coming into a corner. The reservoir also had a remodeling. It is now tucked down and better protected in the event of a rollover.

Over on the fun side of the handlebar, you’ll find a new, slimmer throttle flipper that is more comfortable than the previous one. You’ll also see an independent engine shutoff switch that looks like the rest of the industry. No more toggle switch, the new one is a simple push/pull… hooray! Also, Cat re-thought the tether switch on the ’19 performance sleds. Its magnetic design is easier to manage than the old push-on rubber cap.

With the absolute retail success of the ZR 200 this season, nobody would have batted an eye if Arctic Cat had left the model completely alone for ’19. But they didn’t. The bridge buggy will have electric start in the coming year. There’s really not much more to the story than that. Now your preteens will be able to get the sled fired up on their own, without pulling it over. We think that’s a pretty good idea.

The Thundercat returns to its heritage

The 2019 Thundercat is going back to its roots as a full-on lake runner. Cat dropped its ride height to improve the 200+ horsepower muscle sled better aerodynamics at speed. The T-Cat also gets a low-profile 1.0-inch Rip Saw track. Lake runners stud the bejeezus out of the track so the 1.25 track is just extra weight and extra fan blade that slows everything down. By the same token, it also gets a single carbide on the skis.

The rear suspension sports a new torsion spring with less initial preload to help the Thundercat squat menacingly without giving up bottoming control.

Never ones to let the competition sit comfortable, Arctic Cat joins the performance sport utility market with new X package for the Norseman, including an 8000 option. In the World of Cat, this X package means Arctic Cat IFP 1.5 shocks all around, 8-tooth drivers and a 15x153x2.25” Powerclaw track, versus the 154×1.6” Cobra on the Norseman for mere mortals.

The Hardcore was a European export model in 2018. The Mountain Cat with the beefy rails and the low elevation calibration hits North American dealerships for 2019. Look for the Hardcore to be especially interesting to riders in heavy lake effect zones like the UP, and also among riders who commute to the mountains from the great plains or in upper northeast.

That’s what we know about the 2019 Arctic Cats. There is a lot there for a wide swath of the market. New mountain suspension technology, new trail suspension technology new models and upgrades to some existing models. Visit your local ArcticCat dealership or arcticcat.com for more!