Valcourt, QC, November 16, 2011 – The BRP Ski-Doo Club Support Program has been providing grass roots support to snowmobile clubs across North America since 2009 and this year it really paid off for the Phelps, Wisconsin Snowmobile Club.

Last spring, the Phelps club was informed that in addition to receiving $10 per registered club member they were one of two lucky clubs chosen to receive a snowmobile BRP was giving away in the US. The club decided that they would use the snowmobile to generate more funds for their club activities and trail development, and sold it to a very excited Lela Laurent of Carey, IL. 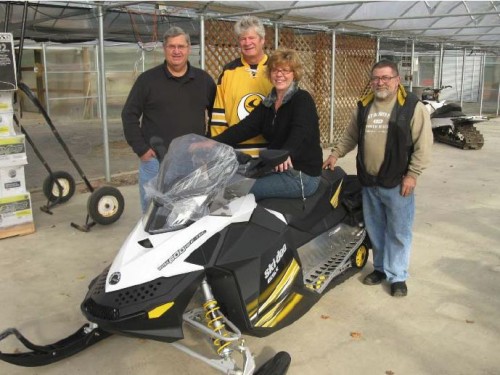 “Early in the 2010-2011 snowmobile season the Phelps (WI) Snowmobile Club became aware of Ski-Doo’s Club Support program to get our members into dealerships. Our club vigorously promoted the program at our club meetings and made individual calls to members to insure our members visited dealerships” said Dick Schulz president of the Phelps Snowmobile Club. “We want to thank Ski-Doo for being the only manufacturer to offer a program that supports both snowmobile clubs and their dealerships. Ski-Doo and its Club Support program sets itself ahead and apart of its competition and we appreciate BRP’s efforts.”

Clubs wishing to share their stories on how the Club Support Program has helped their cause can send information to Steve Cowing.

Bombardier Recreational Products Inc. (BRP), a privately-held company, is a world leader in the design, development, manufacturing, distribution and marketing of motorised recreational vehicles. Its portfolio of brands and products includes: Ski-Doo and Lynx snowmobiles, Sea-Doo watercraft and sport boats, Evinrude and Johnson outboard engines, Can-Am all-terrain and side-by-side vehicles and roadsters, as well as Rotax engines. BRP products are distributed in more than 100 countries. www.brp.com