Microphone Gain Adjustment Enables use with Both Snowmobiles and Motorcycles for Intercom, MP3 Music, Mobile Phone and GPS

PITTSBURGH, PA (September 6th, 2011) – Cardo Systems, Inc., the world’s market leader in wireless Bluetooth communications for motorcycle helmet headsets, announced today the availability of its new updated scala rider® G4 PowerSet for Snowmobiles for communicating with other snowmobilers while on the move. Having introduced Bluetooth® sled-to-sled communication via small and light headsets that easily clamp to snowmobile helmets, Cardo is introducing significant new features and upgrades for the new season to enhance the great clarity and range offered by the scala rider® communication systems. 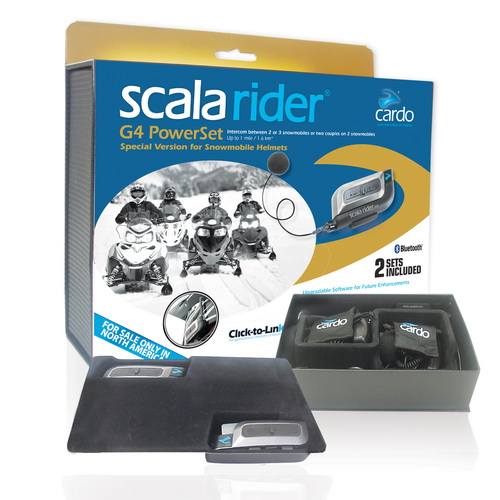 Software Version 3.1 introduces multiple new features for riders including a click-to-link feature enabling calls between the rider and any other snowmobile G4 PowerSet user within the product’s range. The scala rider® G4 PowerSet for Snowmobiles now features parallel connectivity to a MP3 device and mobile phone devices, giving users additional freedom to place phone calls or listen to music while riding.

Other great features in addition to the intercom include streaming wireless music from your smartphone, talking on your Bluetooth phone and listening to GPS directions. For users who prefer to listen to the radio while riding, the new Version 3.1 includes Automatic Radio Tuning that will help capture available signals, even in remote terrain. Users can now press one button to set up to six station presets, and use a new station scanning feature for safer hands-free operation.

The new scala rider® headset also offers added versatility. The Version 3.1 software upgrade includes an innovative microphone feature that gives users the ability to adjust the gain of the microphone to switch between snowmobile and motorcycle usage. In addition to the gain control, users can also move the VOX sensitivity levels to match their need. Adjustments can be made either through the PC software or the device’s own Voice Configuration Menu.

“This upgrade marks a significant enhancement for our industry-leading scala rider® G4 PowerSet for Snowmobiles,” said Abraham Glezerman, CEO of Cardo Systems, Inc. “With our new click-to-link, users can now talk to any other G4 PowerSet within range, allowing groups of riders an additional layer of meeting up and security. The several audio-related upgrades enhancements allow connectivity to other devices, and increased control over the audio quality of conversations and the radio. The product is the right choice for snowmobilers who demand a wireless communication solution that is comfortable and intuitive to use and enhances the enjoyment and security of riders.”

Cardo Systems will display the G4 PowerSet for Snowmobiles at the following upcoming events: 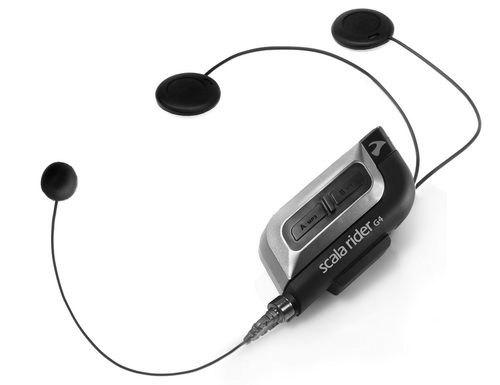 Current users of the scala rider® G4 PowerSet for Snowmobiles can download the free Version 3.1 software upgrade at www.cardosystems.com.

Cardo Systems, Inc., headquartered in Pittsburgh, PA, has specialized in the design, development, manufacturing and sale of state-of-the-art communication and entertainment systems for motorcycle helmets since 2003. Cardo’s scala rider® line of headsets, now available in over 50 countries is the world’s bestselling Bluetooth system for the motorcycle industry.  For more information call (412) 788-4533.