Ask and you shall receive.

You have got to appreciate a company that speaks to the customer demands and requests.  Such is the case with the new Polaris Indy 800 SP.  When Polaris introduced the Indy 600 last year, it was a home run for many reasons. It had the styling, performance, handling and best of all the price that snowmobilers wanted. With the way the industry is going, it was hard to find a good performance machine for under $10,000 and Polaris delivered just that.

The Indy 800 SP adds a few Benjamins for the few extra ponies but still comes in very reasonable at $10,599. The performance difference, however, is staggering. Even for a short track sled, it still has no problems lifting the skis when accelerating on hard pack, while delivering precise handling and a very decent ride. The machine has a nice tune from the moment you hit the key and can tell this is a snowmobile that wants to run like a wild Mustang. The fuel injected 800 shows absolutely no issues from the pre-2011 models and offered crisp, clean, throttle response and what feels like an unlimited top end.  We fell in love with this engine on the 2011 Switchback Assault and the INDY offered many of the same characteristics but with less pushing in the corners in exchange for a slightly firmer ride quality. After riding a 2013 ETEC 800, which has a more linear powerband, we were convinced the Polaris would leave it in its snow dust but side by side, the Ski-Doo has the slight edge in 1000 feet. Overall, the Polaris was more responsive, snappier, and more fun to ride.

Our first adventure with the Indy 800 was the trails near Mille Lacs Lake in Minnesota.  The Soo Line Southern Route is an old abandoned railway corridor and offers a nice, wide trail all the way from Little Falls to Superior, Wisconsin and skirts along the southern shores of Mille Lacs. Part of the journey included the Red Top Loop, Kathio State Park and Father Hennepin State Park. The 100 mile journey was an easy afternoon ride and offered breathtaking scenery, well-groomed trails and popular pitstops like the Bayview Bar & Grill near Onamia and Buzzie’s near Isle, MN.

The Polaris handled beautifully through the tight twisty trails of the Red Tail Loop and was well mannered through the parks at 25 MPH.  The Soo Line is a well-travelled thoroughfare and the trail became choppy as the day went on with increased traffic from the ideal conditions. When the other machines were bouncing wildly, the Indy kept things under control and offered a very comfortable and stable ride. Even after 100 miles, other riders were ready to call it a day, while I was ready for much more. The cornering was very precise and generated little to no ski lift even when cornering hard. The sled’s ergos are designed perfectly too where going from a seated position to standing is effortless. The only complaint is the hand and thumbwarmer controls.  After so many years using similar controls on Polaris models, I should be used to it but it still bugs me that you have to shut them all the way off and clumsily click to the right to figure out what position they are in.  There are the purists that will also argue that the ProRide rear suspension is far superior to the INDY rear skid.  Although it may offer a better ride in almost all conditions, the styling and simplicity of the INDY is hard to beat and still offers a very nice ride when you have it properly set up for your weight.

The INDY 800 SP is a very nice package at still an affordable price.  It’s exactly what we asked for last year after riding the 600. Okay, what should we ask for next? 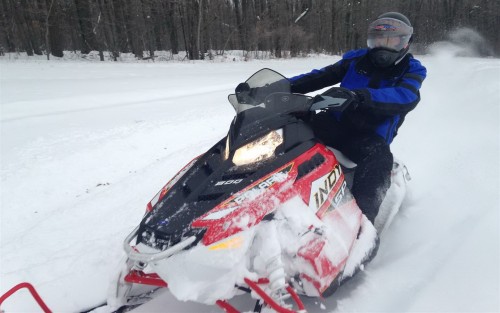