Last season the Max Sled Team gained access to Yamaha’s 2012 Venture GT. The dismal snow conditions didn’t allow us much time on it last season, so we asked Yamaha if we could keep it another year. Since essentially nothing changed from the 2012 to the 2013, we thought it would be good to get a few more miles on this sled.

We were able to take it out during our Pink Ribbon Ride a couple weekends ago. During that ride, the weather was fair with temperatures in the teens Fahrenheit. Trail conditions were less than ideal with enough snow to lube the slides and get the skis wet. Every bump and nubbin was fully exposed, enough to make any suspension work out. 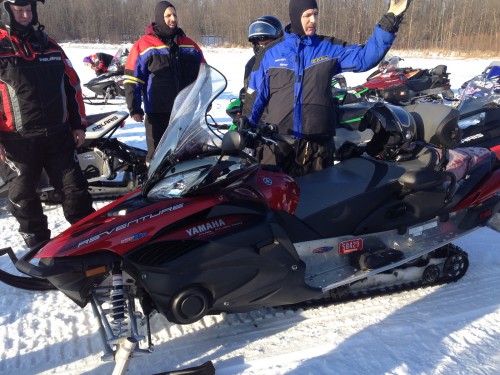 During this ride, we rode single on the two-up sled. While the backrest could be positioned forward, we chose to keep it back and out of the way. We aren’t ones to ride with backrests resting on our backs. Randy Nemitz has this to say about the Venture GT.

“I’ve spent the most time on this unit and have some great news to report. When Yamaha came out with the Electric Power Steering (EPS), my first thought was ‘cool but do you really need it?’ After using it for some time, I can definitely say ‘yes, it’s nice.’ When you are riding with two people on the sled, it shines to the point you might just forget your partner is on the back. At slow speeds or just getting around the parking lot, it’s effortless.

This past weekend we rode a comfortable 25 to 35 MPH on some very bumpy and rutted trails. The Electric Power Steering really shined. After a while you get used to the feel and you think that the EPS isn’t really helping, but when I traded sleds with Shane, who was riding the new Polaris Indy, I immediately felt the difference, and the Indy is a much lighter machine. I couldn’t believe the feedback and fatigue that I was feeling. The (EPS) makes a huge difference and this tells me it’s worth it to upgrade. You would be very impressed at how many miles you can put on and feel great.” 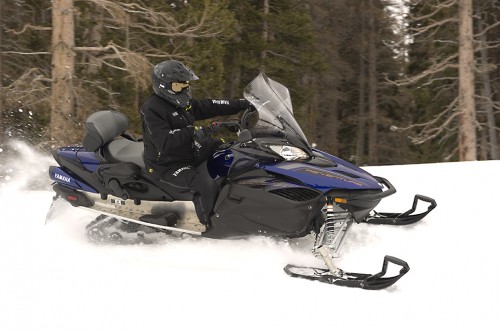 I had the same experience. I noticed right away that the EPS took away any shoulder fatigue I was getting from riding tight twisties. And during the slow turns in parking lots and at stop signs, no effort was needed to turn the skis.

We both noticed a couple other things. The rear suspension was soft and pleasant over the bumps at ANY speed. The bumps you would normally tighten up the sphincter on, never so much as bothered. You feel so much more relaxed at the end of the day’s ride when you don’t have to tense up on those bumps.

The second thing we noticed was the ergonomic position of the seat is a little too forward and a bit low yet. The small bump in the seat where the driver sits is too far forward and when riding single you tend to ride up on the fuel tank, and I’m not a tall person. This is the only thing that makes the Venture GT a little uncomfortable.

Otherwise the controls are all in the right spot, the gauges are easy to read, and that windshield will block you from any head-on wind or debris from the trail. We did notice something peculiar about the big window, and that was at higher speeds the cold air would come around the windshield and push against your back. So while the front of you stays plenty warm, your back can get chilled. 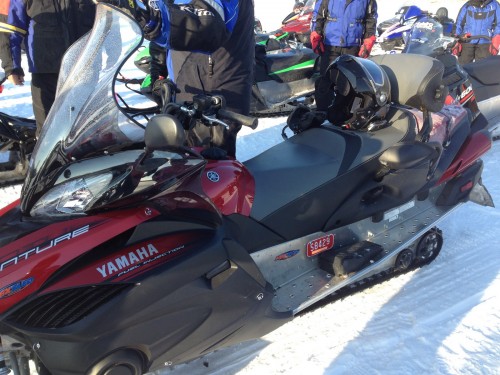 Engine power on the Venture GT was spot-on as well. You move the throttle lever and the power comes on instantly and it pulls hard. This sled is no slouch and you won’t be the last one across the lake with it. We had just hit our 500 mile break-in period, and that day we used 5.3 gallons of gas for 78 miles giving us 14.7 MPG. Not bad, but we expect it to get better as the sled gains miles.

As two-up sleds go, Yamaha’s 2012 (2013) Venture GT is top-notch, and there’s not a lot of creature comforts that would make this much better that aren’t available as accessories. In fact, the only thing that might be missing from this machine is a heated seat, which some Cat riders told us they really liked about their Arctic Cats.

I can’t emphasize enough that this machine can fill the bill for the trail rider who travels two-up sometimes, and yet goes alone sometimes. Its modern looks, arm-pulling power, and great suspension are enough to give any rider everything he or she needs. Adding power steering, warm cockpit, and easy maintenance sets this over the top. 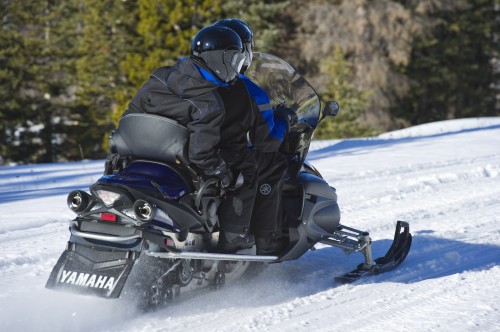