And now, ladies and gentlemen, the engine you’ve all been waiting for…the one, the only, E-TEC 800R!! (The room fills with deafening applause, screams and whistles – the engine takes a bow). Yes, when the E-TEC 600 came out, we all asked “when is the 800 coming?” to which the representatives at Ski-Doo would say “what 800?” Oh yeah, we all knew it was coming; it’s a natural fit. We just didn’t know we’d have to wait TWO years for it.

Yes, the smooth running, fuel miser, 800cc E-TEC from BRP is snowmobiling’s most technological 2-stroke motor. It’s light, it’s efficient, and it’s powerful, and it purrs like a kitten. The motor finds itself in a number of Ski-Doo REV-XP chassis in 2011, and while this article is about the MX Z, it could equally be about nearly any of Ski-Doo’s trail models with the big E-TEC.

The MX Z is Ski-Doo’s mainstay when it comes to trail and ditch riding, and it so happens to be the basis for their snocross race sled as well. Ski-Doo doesn’t necessarily build a separate chassis just for racing, but they do reinforce the MX Z and put on a race calibrated shock package and take it out on the track. While the MX Z itself sports near perfect ergonomics, the flattest cornering, and most positive steering, the big news for 2011 is the E-TEC 800R. 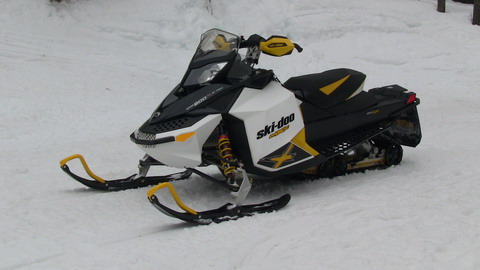 The 800 had to be redesigned to some degree in order to accommodate the E-TEC technology. It wasn’t simply a matter of slapping on the E-TEC 600 valves and calling it a day. There are bigger pressures and bigger fuel delivery concerns among other things. Basically, the E-TEC valves on the 800 are driven electronically both ways rather than one way with a spring return. This meant faster electronics and more precise calibration. All in all, the E-TEC 800R sips fuel compared to the other big bore motors from the other 2 OEMs. It’s also easier on oil.

When you hit the starter, the E-TEC 800R is as smooth as silk, relatively quiet and doesn’t sputter as it’s warming up. Not that the other 2 800’s in the group sputter, but you will notice the difference if you hear them side by side. There’s something about the smooth operation he Ski-Doo E-TEC 800R delivers. The biggest thing you’ll notice is the easy throttle pull, one of the biggest complaints we have about the 800R PowerTEK motor. 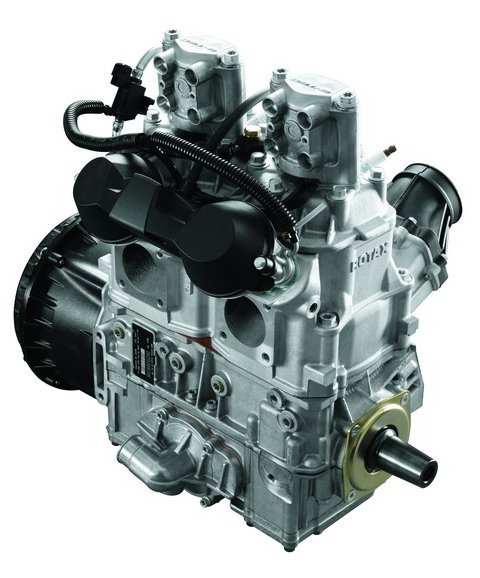 The MX Z with the E-TEC 800R motor is available in 3 packages differentiated by shocks, seat, gauges, windshields, and other amenities. The TNT is the in-season and base model, and then you could have gotten the X or X-RS if you pre-ordered last spring. Putting the E-TEC 800R in the MX Z chassis simply gives you a much better package than the PowerTEK motor gave you. While the shorter track may be a bit squirrely underneath (we like the Renegade’s 136” for this reason), the MX Z is about untouchable in the corners on the trail. You will become a better rider with the REV-XP chassis from Ski-Doo and the new E-TEC 800R is, well, amazing. 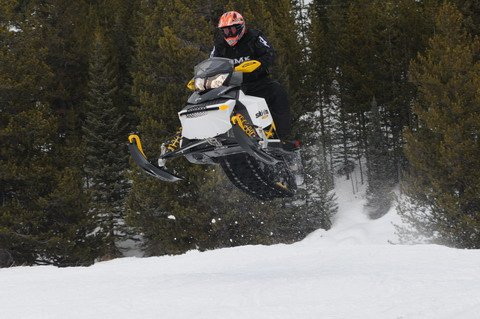