Or the Yamaha Nytro Boost Fairy Options as I like to call it.

Some people believe in Santa Claus or the Easter Bunny.  But as I mentioned in my Snow Shoot rider report, I believe in the Boost Fairy.  I am going to admit right here that I have been confused by Yamaha’s mountain sleds more than once.  It sometimes feels like they aren’t being super attentive to us mountain riders and just when I start to get on that bandwagon, they poke me in the eye with something crazy and remind me that they march to their own drum beat and like a pair of 12” subs kicking in your
teenage son’s car trunk, that beat can make you tingly all over. 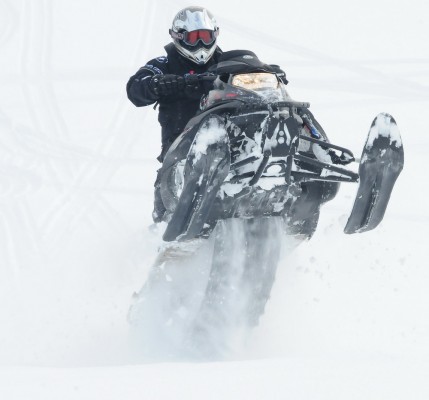 Enter the 2012 Nytro MTX with accompanying Boost Fairy options.  If you have been under a rock let me enlighten you.  For 2012 Yamaha held course with the mountain sled offering in the Nytro MTX.  In the standard offering you get some very nice equipment.  Yamaha does nothing half way and the 2012 Nytro MTX comes with a terrific track in the new 162 Ascent.  It’s a 15x162x2.25 3.0 pitch single ply track with a stiff lower 2/3 paddle design and softer top 1/3.  The result is what I consider to be the best track Yamaha has ever put under one of their mountain sleds.  It has great deep powder performance but still offers good braking on those little girl screaming downhills.  And the new track was designed to be able to handle the added power from the boost options on the MTX.  You also get new lighter MT9 skis and other weight saving things like a lightweight exhaust and tunnel.

You perch on a new, slightly narrower and taller seat which makes for good comfort and easy transition from sitting to standing and back and forth from side to side.  The whole sled sits on top of the ProMountain Air suspension with new rails, much better approach angle and Fox Float 2 and Float XV shocks front and rear.  You’ll be hard pressed to find a stock suspension that rides better or is better matched to its host machine than the Nytro’s.

All of those things make the standard Nytro a nice sled to ride.  Yeah, we hear all the other OEM riders talking about weight and such, but if you are looking at a Yamaha you are doing it because you want unparalleled quality and workmanship as well as dependability and performance.  In the 4 stroke world, Yamaha leads the way and I find the Nytro a pretty decent
mountain sled. 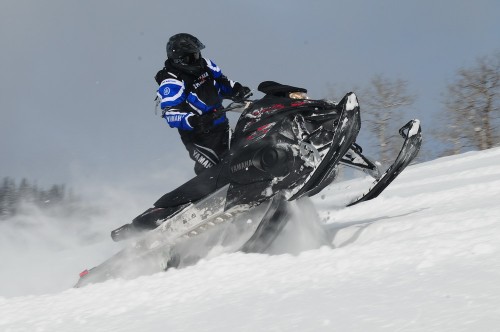 Then of course, we have the above mentioned poke in the eye.  I think Wade West, marketing manager for Yamaha snowmobiles probably had a good laugh thinking of me when the plans were forming around the boosted Nytros. I know when I walked in to the Yamaha trailer back in the spring he gave me a shifty little smile and said “You are going to like what we have this year”. That is possible the most understated thing Wade has every said to me.

So for you rock dwellers, the 2012 Nytro MTX comes with a boost option from the factory.  For the ridiculous price of $1500 plus install you get a factory approved accessory Push Turbo or MPI Supercharger system.  Yes, factory approved… can you say warranty.  I affectionately call these 2 options the Boost Fairy options.

I had the chance to spend quite a bit of time on both a set of prototype boosted Nytros as well as the later factory installed ones.  If I termed the Nytro MTX pre-Boost Fairy visit as ‘decent’ then post visit they are stupid fun.  We wailed on the two Nytros, running them side by side and running them against other sleds and running from other riders because we didn’t want to share.  I can only describe it as “smile induced euphoria”. Over the course of a couple of days I watched a half dozen different riders, some who had never ridden the mountains to others that have grown up in the mountains, throw a leg over the boosted Nytros and every single one of them climbed off with an ear to ear grin. 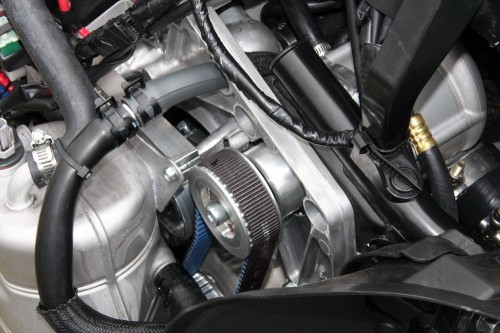 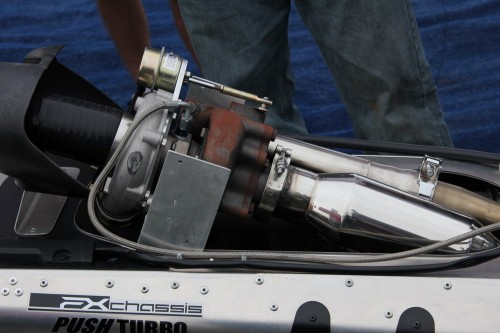 Yamaha says the 2 boost options offer 180 hp.  I’m not going to argue with them, but honestly, I think they are probably a bit stronger than even that.  I get asked all the time what the difference between the Supercharger and the Turbo are and the best way I can explain it is that the Supercharger feels like it comes on the power a little earlier, but the Turbo feels like it has more on the big end.  I don’t know if that is really true, but that is the seat of the pants feel to me.  I found the Supercharger a bit easier to ride in the tight trees but in a side by side drag race up a big hill the Supercharger would jump out a bit ahead of the Turbo but the Turbo would catch it. Either one was stupid faster than any other sled we ran them against
including the new Cat M1100T.

I’m not going to kid you, just adding boost to the Nytro doesn’t change the fact that it’s a heavy sled. But liberal amounts of horsepower can sure make you forget about some extra pounds.  When you stab the throttle on the boosted Nytro, even in waist deep powder, it gets its legs under it, hooks the Ascent track and wags the nice new MT9 skis in the air like a flag waving in the breeze.

I found the boosted Nytros to be smooth as silk running and very linear in their power.  The Supercharger was a little ‘snortier’ right off idle, but nothing that would cause you problems.  It just feels like it’s ready to go right from the crack of the throttle.  Once you wack the throttle open on it if is off and running.  Nothing but smooth power delivery and good pull right through to top end.  Just good smooth power and lots of it.  The Turbo could be described the same way.  A little tamer right off idle on the one I rode, but once you open the loud lever you get the feeling that you are having your arms stretched. 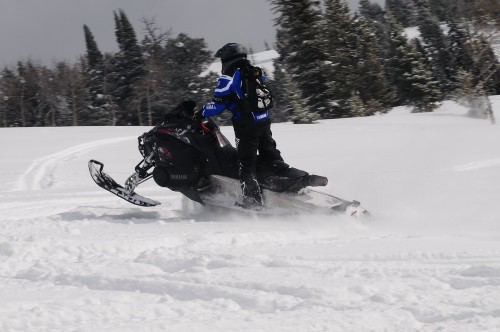 So much about snowmobiling is visceral.  You are out there on the sled, feeling the elements, experiencing the sights and sounds and feelings.  I wouldn’t be honest if I didn’t say that a boosted Nytro adds a dimension to that experience.  The boosted Nytro sounds ‘angry’ and things tend to come at you faster when you are on the boost then normal and the skis are dancing in the air and you have a big smile on your face… and I found myself giggling and laughing and praising the Boost Fairy.  Try it for yourself.  Beg, borrow, or steal some seat time on a boosted MTX… but don’t blame me when you start dreaming of a visit from the Boost Fairy… blame Yamaha.