Last week’s storm definitely panned out for snow lovers across the affected region. Despite a sudden southeastern shift in the overall track of the system, it still produced a wide swath of 6-12+ inches of snow from northern Nebraska to northeastern Wisconsin. The highest snow total I saw was 15” in Zumbro Falls, which is about 25 miles north of Rochester, MN. 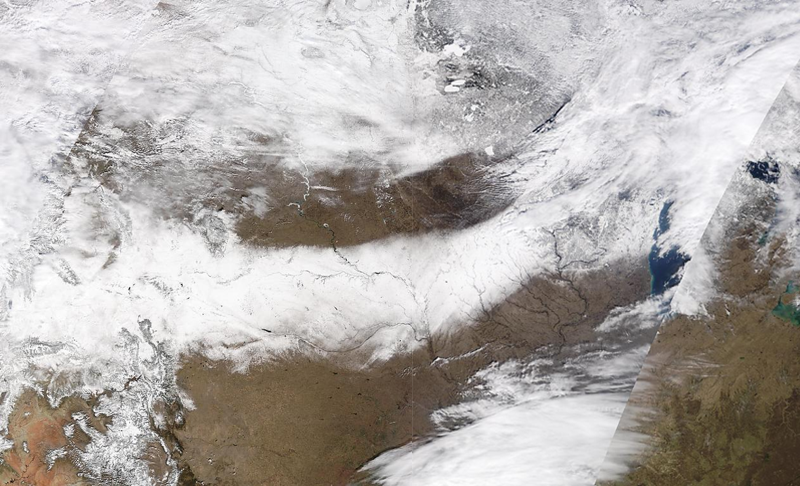 This visible satellite image from February 26th shows the extremely tight snow gradient from the winter storm last week. 30 miles was the difference between no snow and 6 inches of snow. 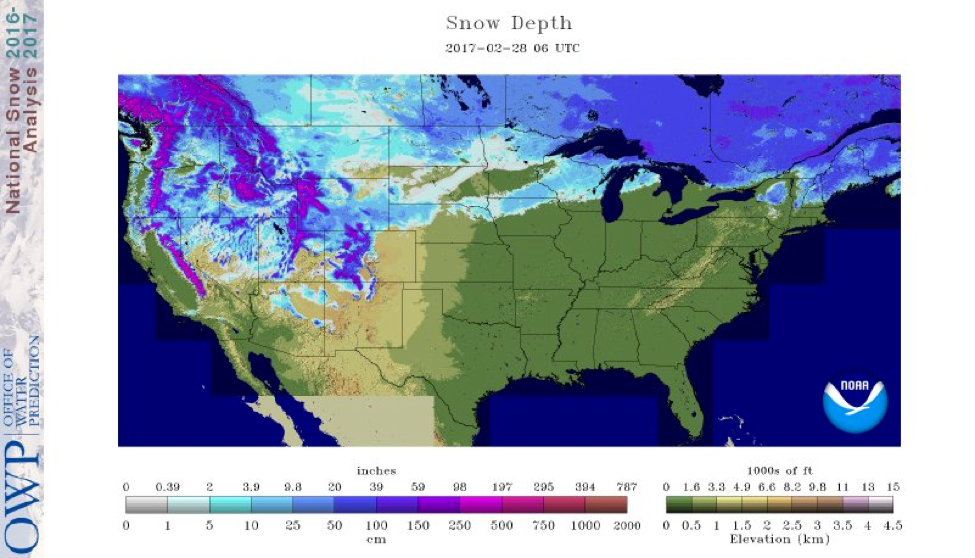 Here is the updated modeled snow depth for today from the NOHRSC. It’s nice to see that new swath of snow ranging from 4 to 10 inches across northern Nebraska through northeastern Wisconsin. Warm weather across the northeast last week has depleted the snow depth out there, leaving Maine and northern New Hampshire as pretty much the only states in the region that has credible snow for snowmobiling. There are still very impressive snow depths out in the higher terrains of the western U.S., so there should be quite a few weeks of sledding left for that region. Unfortunately, with the sun is getting higher each day as we get into March, snow will still melt when temperatures are below freezing. This can do quite the damage to trails that are in open areas as we go later in the season.

Things will be quieter compared to last week, with no major snow storms affecting the northern U.S. over the next several days. The Pacific still remains very active, with several waves of precipitation producing more snow for the higher elevations in Washington, northern Idaho, northeastern Montana, and Wyoming. From what I’ve heard, snowmobiling has been excellent out there. For the rest of the U.S., a system will produce moderate accumulations for central Wisconsin and northern Michigan in the next few days.

Here is the low pressure position this morning at 3AM. This will likely be another system that will initially start off as rain and change over to snow as cold air wraps in behind it. As mentioned above, this will not be similar to the storm that we had last week, as it is much weaker and has much less moisture to work with. Main areas affected look to be central and eastern Wisconsin and far northern Michigan. 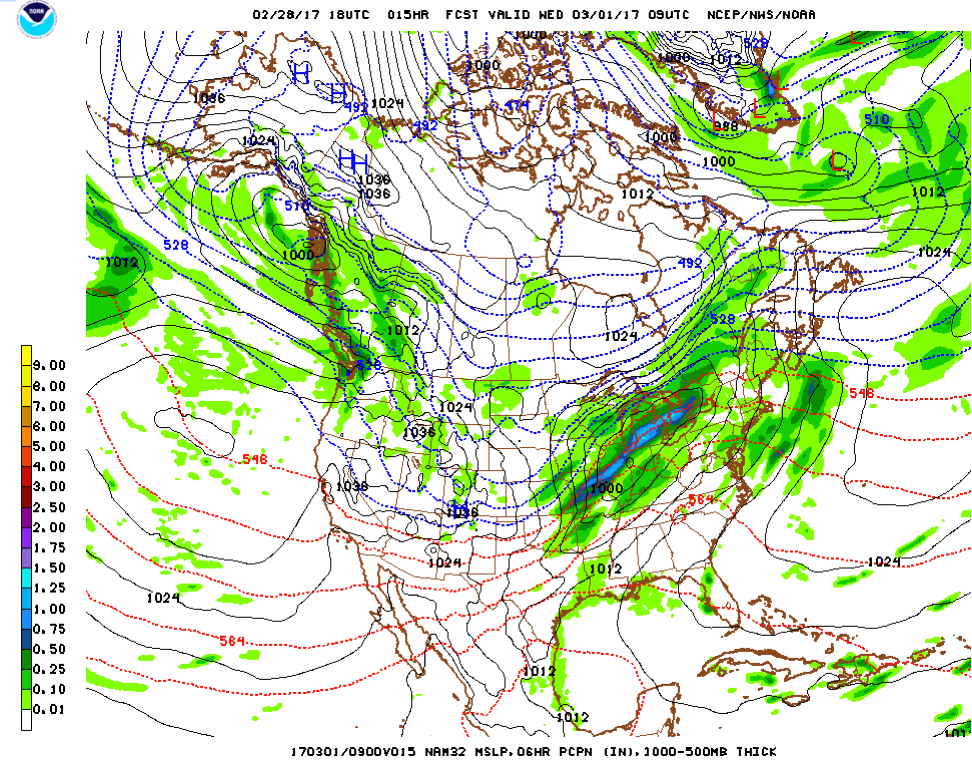 The NAM is a little stronger with this system, as well as a little farther south. The timing is pretty consistent between the two models. The red and blue lines on these maps represent atmospheric thickness. This helps us indicate a general idea of where the rain/snow line will be as the system progresses to the northeast. Any precipitation behind the blue lines will likely be snow, and behind any red lines likely be rain. The transition zone between the two can be rain, snow, or a mix depending on the temperature profile of the atmosphere. 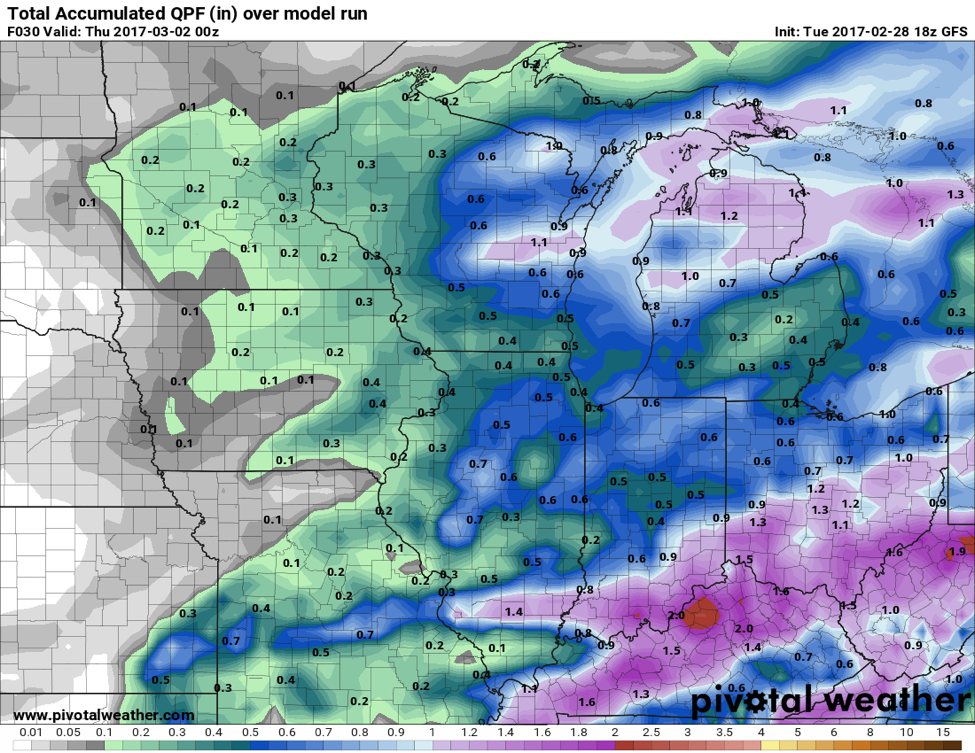 Like last week, the difference in models is creating quite the challenge. The forecasted accumulated precipitation (ending 6pm this evening) for the GFS is less and further north than the NAM. Though this model is printing out some 1+ inch precipitation amounts (which would equate to ~10 inches of snow), we unfortunately won’t be seeing snow totals high. As mentioned earlier, the precipitation will initially start out as rain and change over to snow as the day goes on, which is why we’re expecting lower snow totals. 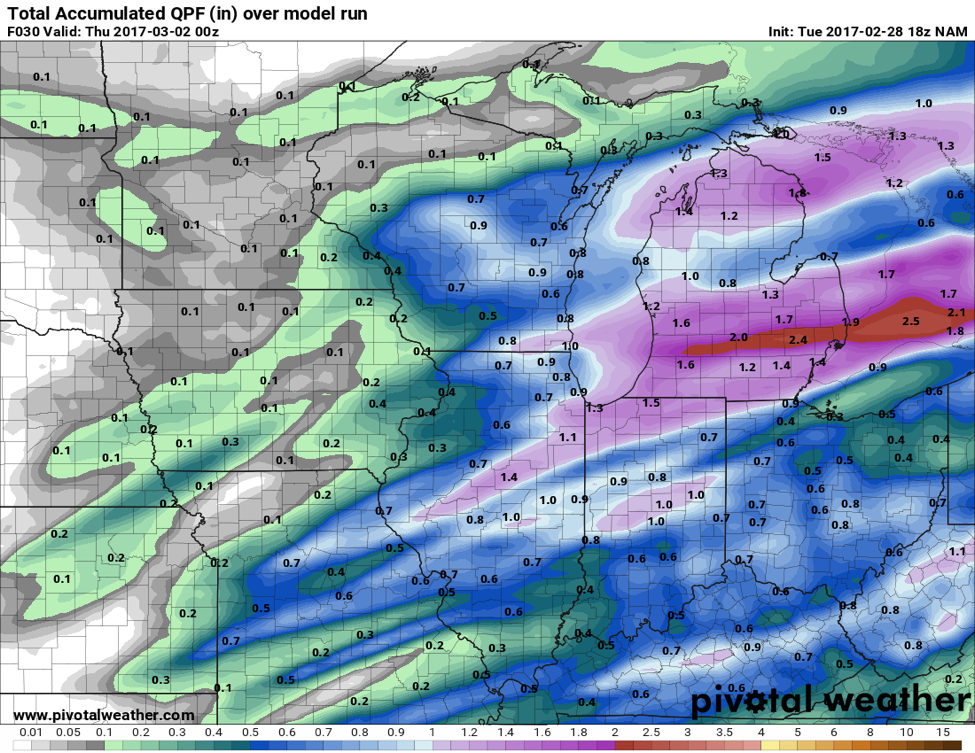 Here is the NAM 24 hour accumulated precipitation for the same time period. It’s about 50 miles farther south and a little more generous on precipitation totals. For places along the Wisconsin-Illinois border, there is a good chance that all of the precipitation will be rain, with rain changing to snow farther north and west towards Madison and the Wisconsin Dells where the cold air will move in sooner.

The final totals for this system will be far from impressive, but will definitely get the ground white in some areas and add to the snow pack in others. Overall, a fresh 3-5 inches of snow can be expected in the heaviest band, which should set up along a line from the Wisconsin Dells to Traverse City. There will be lighter amounts to the west across southeastern Minnesota and west-central Wisconsin. Expect 1-3 inch totals in these areas. 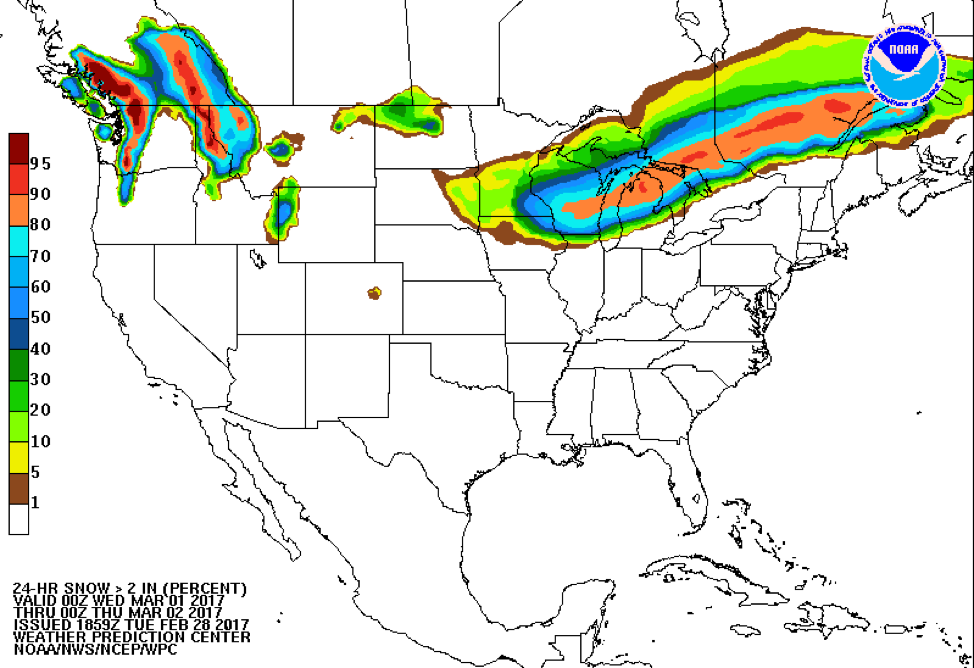 Finally, here are the probabilities of at least 2 inches of snow falling between 6PM Wednesday and 6AM Thursday. The orange area on the map is where I’m expecting the heaviest snow totals; it wouldn’t shock me to see some isolated 6 inch amounts in northern Michigan.

Temperatures will cool behind the system across the north-central U.S., but overall the days are unfortunately getting warmer as the sun gets higher. I currently see nothing of major interest in the future in terms of another significant winter weather event, but March can still be wide open for these storms to occur – we’ll keep our fingers crossed.