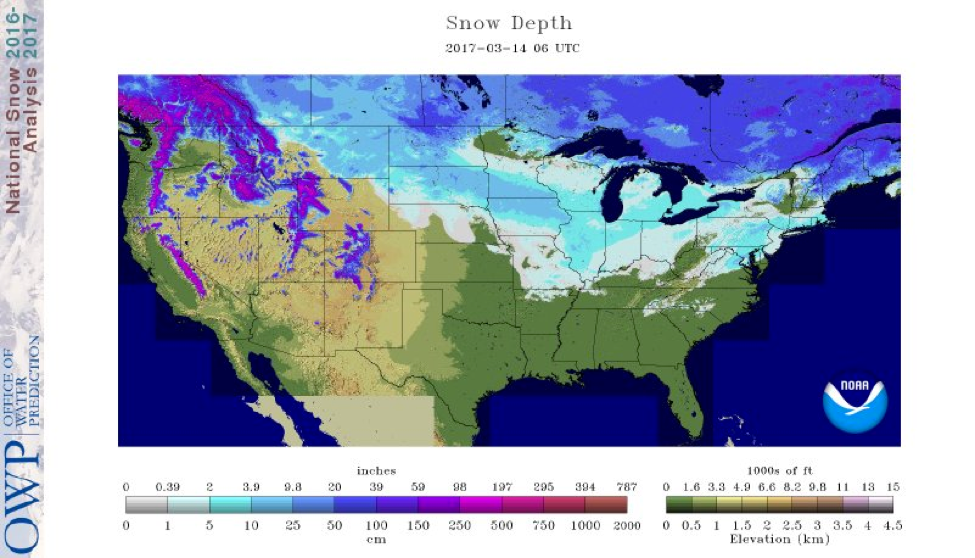 Here is the updated modeled snow depth for today from the NOHRSC. There is much more snow coverage than last week, which is great to see for us snow lovers. A clipper system last Sunday produced a wide swath of 6-12 inches of snow from southwestern North Dakota to north-central Iowa. Last week, the models had this system much farther south, affecting mostly Nebraska and Missouri. There were no indications of this system moving north, so I left it out of the weather post. Luckily, the system ended up shifting north into areas with more abundant snowmobile trails. This map is from last evening, but expect a much different landscape in the northeast as a strong Nor’easter is currently producing heavy snow totals across upstate New York, Vermont, New Hampshire, and Maine.

There’s new life for the snowmobiling season in the northeast, even if it will be short lived. With totals surpassing two feet in some locations, it will take a while to melt, even in mid-March. Cold air will fill in on the back side of this system, bringing below normal temperatures for much of the region for at least the next few days.

For the rest of the country, look for a ridge to build out west later this week that will propagate eastward over the Midwest, bringing above normal temperatures to the region. Most of the snow from last Sunday’s clipper system will surely be gone come Monday. The Pacific still remains very active and continues to bring rounds of precipitation to the Pacific Northwest, with snow occurring in the higher elevations. 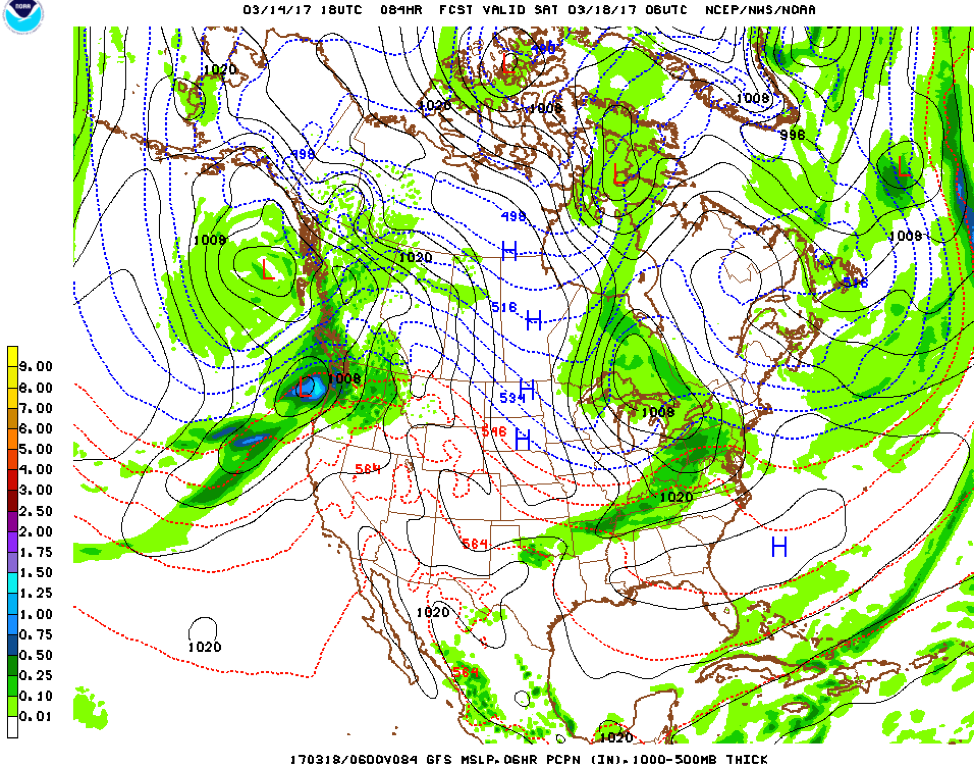 The remnants of Tuesday’s Nor’easter can be seen on this map, with the same low pressure system located southeast of Greenland. The ridge that is forecasted to move eastward over the Midwest later in the weekend can be seen over Montana, Idaho, and Utah (as indicated with the red arching thickness lines). Two low pressure systems in the northern Pacific are providing the energy for precipitation across the Coast Mountains as well as the Canadian Rockies. This time step is far out, but it currently indicates a weak system over Ontario that could produce more snow in the northeast, though amounts right now look to be light to moderate at best. 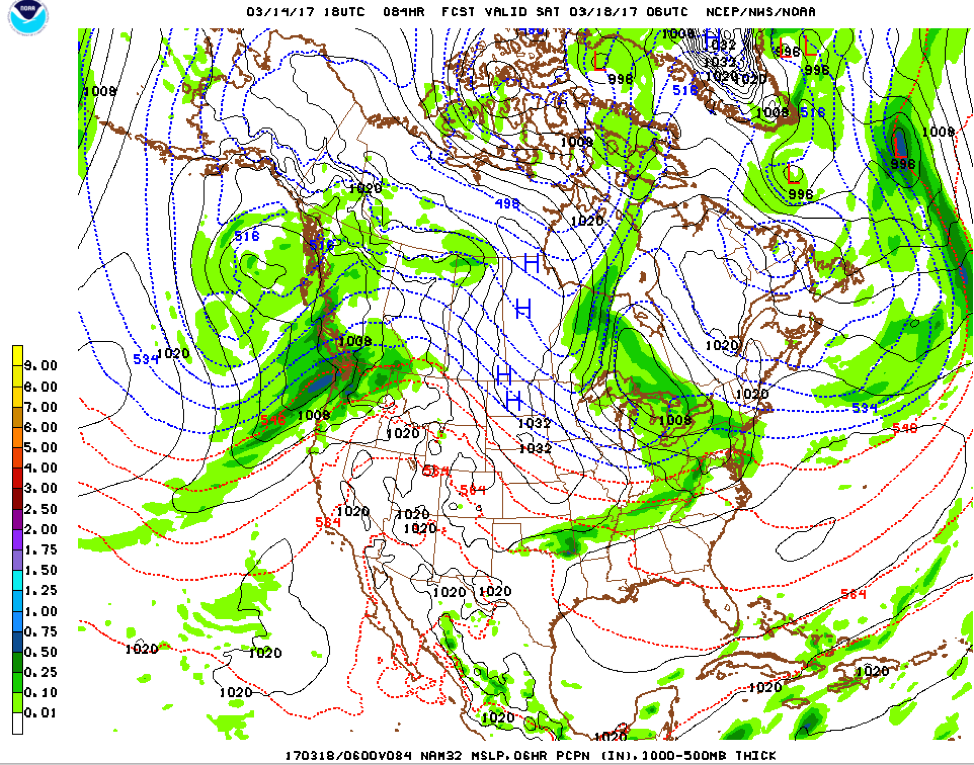 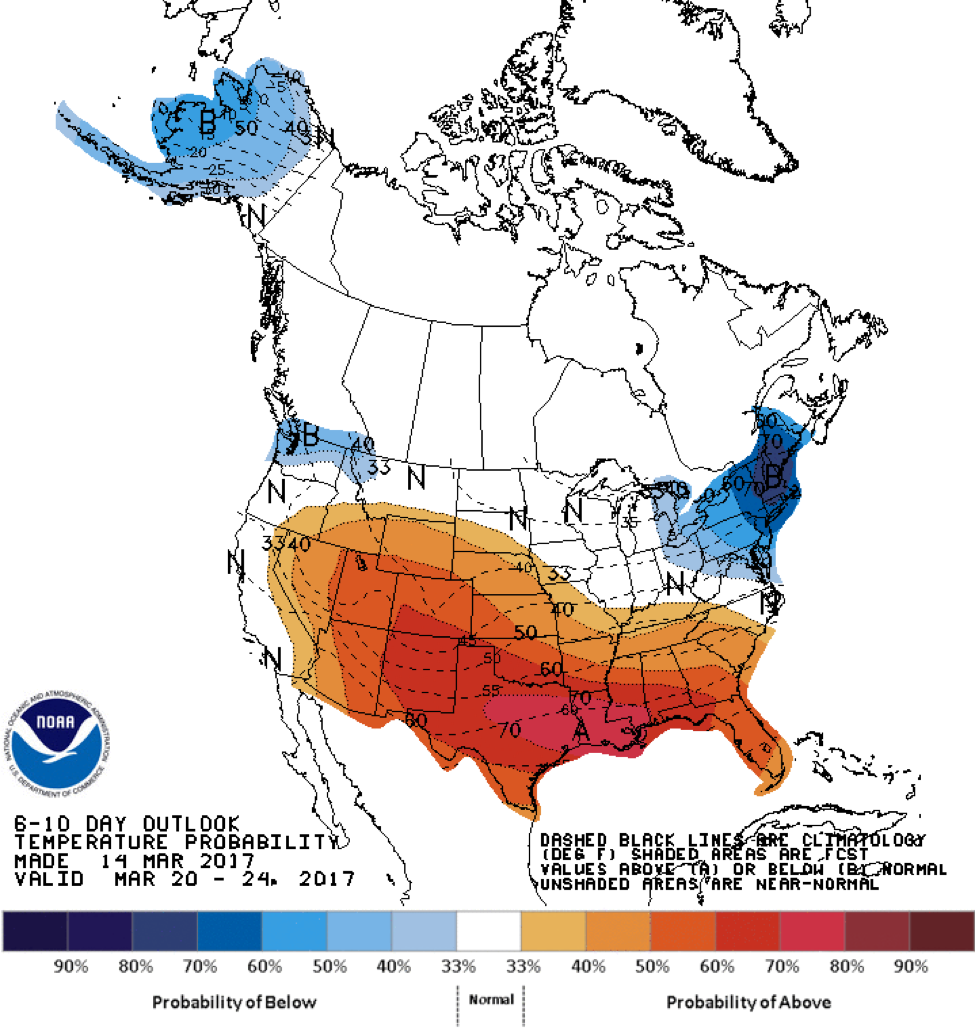 Here is the 6-10 day outlook from the Climate Prediction Center. The CPC creates these graphics from model ensembles (blends) and are updated every 24 hours. These maps aren’t guarantees, but chances of certain areas being above or below their average temperature for the given time of year. The same percentage maps are created for precipitation as well.

Here is the probability of precipitation being above or below normal for the dates of March 20th-24th across the U.S. Chances of below normal precipitation are fairly high across much of the areas where snowmobile trails are common. 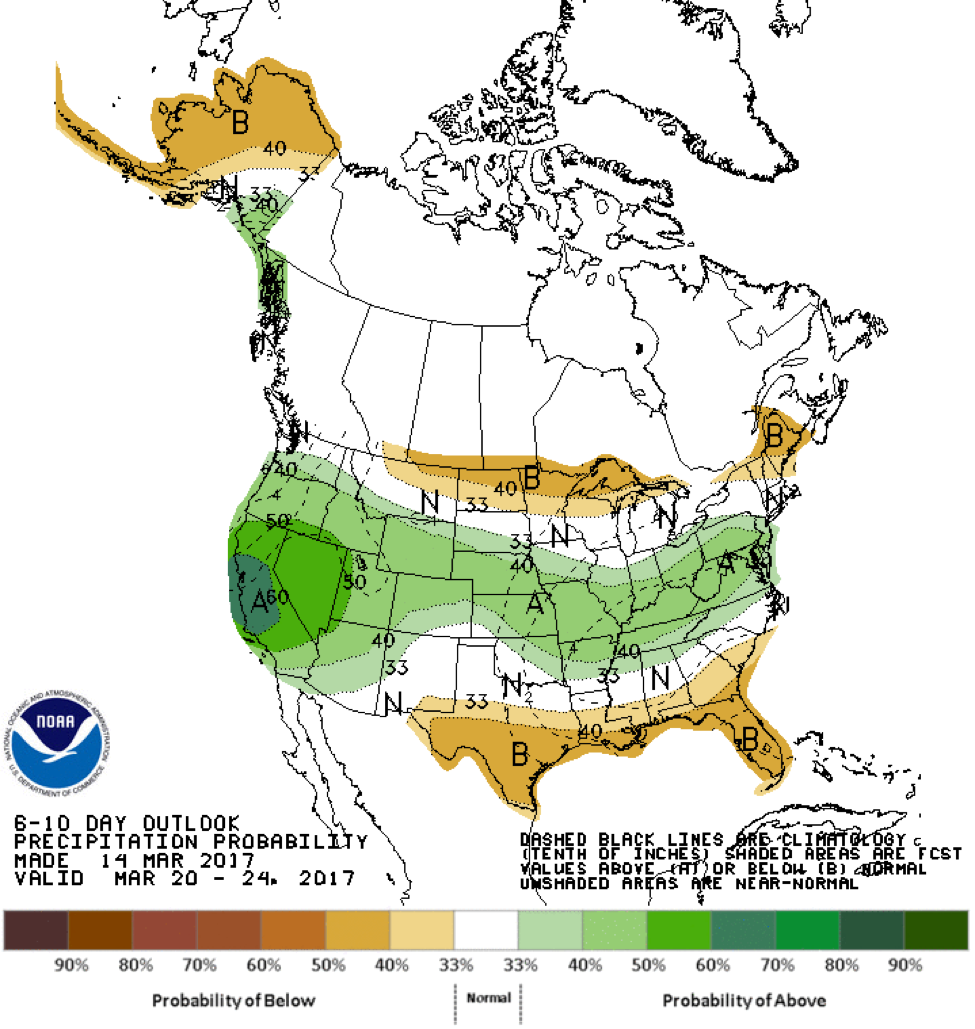 Winter got an extension in the northeast, but it unfortunately looks to be dwindling for the rest of the country (except the mountain west). I don’t see anything of major interest looking long term, but when I wrote this post last week, the Nor’easter was not picked up by the models until a few days later. Things can change, but the reality is average temperatures across the northern U.S. are rising every day as we get closer to April. The season is definitely coming to a close, but some areas are getting there faster than others.

If you’re lucky enough to have snow in your area, happy riding!