Ski-Doo is the first out of the gates with their 2016 model year launch, lest we forget who continues to be first in the marketplace. Ski-Doo continues to gain “snow” in most areas. They have been running strong ever since they changed the way we ride sleds – shortly after the 2003 REV when Ski-Doo gained, and has held the top position in the market. For 2016 they continue to move forward.

Here are the highlights for 2016, to give you some information on whether or not you want to upgrade or switch over to Ski-Doo next season.

Something you will find on some of the models next year is a new Pilot TS adjustable ski. As trail conditions change, the performance of the snowmobile skis change. The Pilot TS gives the rider the ability to dial in the ski’s runner/carbide blade to be more aggressive and responsive, or less aggressive and relaxed. 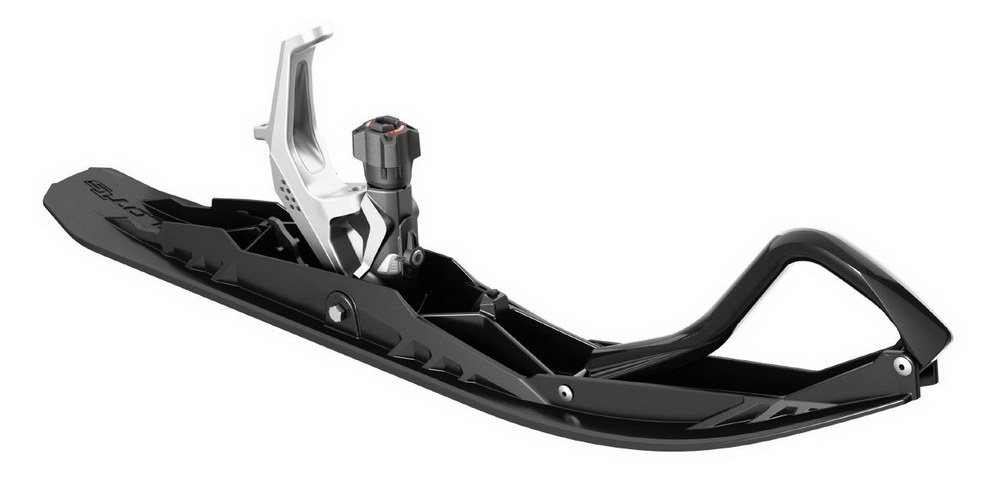 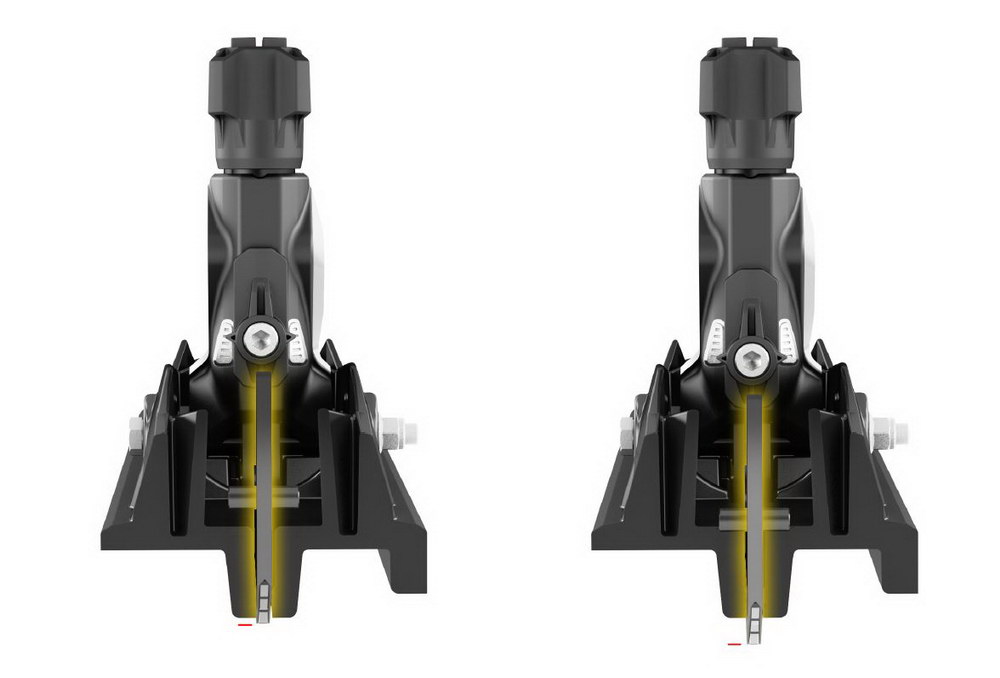 Twisting a knob in front of the ski leg raises or lowers the runner blade. The further the blade is out or extended, the maximum bite in corners or on ice is achieved. Fully retracted, it allows the ski to steer a little softer (no darting), yet more relaxing to the rider when you are just cruising the trails. As trail conditions change throughout the day, say from hard frozen to soft mushy, you can simply adjust the steering and cornering effort with the turn of a knob. 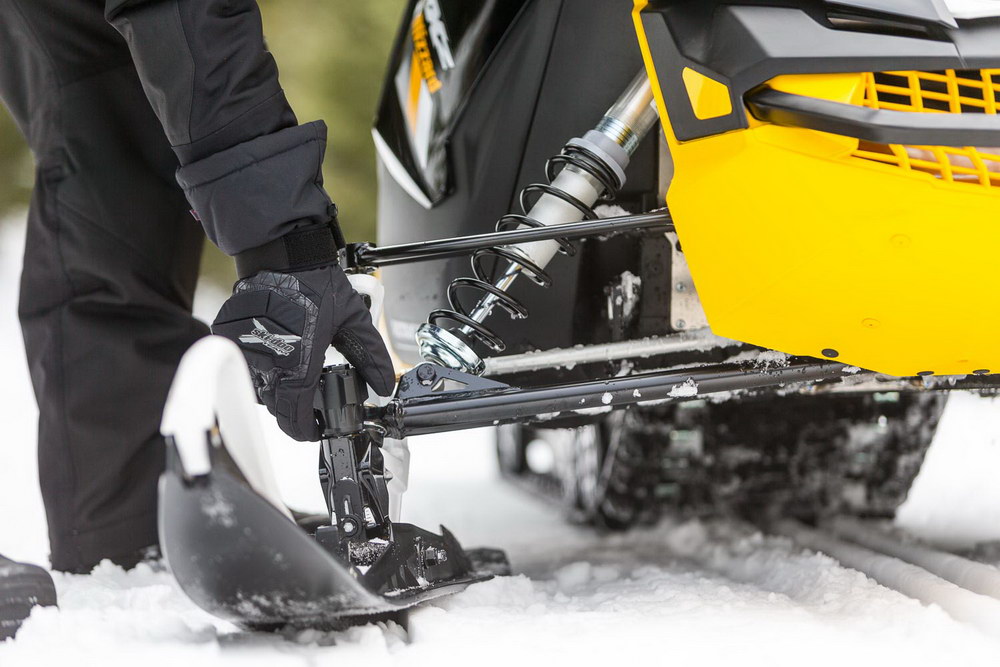 Pilot TS skis are standard on the 2016 MXZ Blizzard, Renegade Enduro, and the Grand Touring SE (more on these below). They are also available as an accessory for sleds with the RAS 2 front suspension. Also on some models, you will get the Pilot TS’s if you spring-order the Adjustment Package with your sled.

Characterized by their ability to handle bumps in the ditches or tight turning in the trails, the MXZ is Ski-Doo’s flat-lander mainstay. This is also the model that the race sled is based from. MXZ riders typically care about light weight, quick response whether it’s throttle or steering, and fast mogul absorption. Here, the rMotion rear suspension shines.

The MXZ-X, X-RS, and Blizzard models will get the longer 129-inch track found on their race sleds. MXZ models with the 1200 4-TEC will also get the REV-XS body styling, and intelligent Throttle Control (iTC).

The new model for 2016 in this category is the MXZ Blizzard. The classic Blizzard name has been synonymous with highlighting the latest racing tech on a consumer sled. For 2016, the Blizzard is an in-season package that includes many of the features found on the XR-S, but offering a little tamer experience. This model includes a 129” rMotion rear suspension, HPG Plus shocks, Ice Ripper XT track, the new Pilot TS adjustable skis, and a fuller windshield. 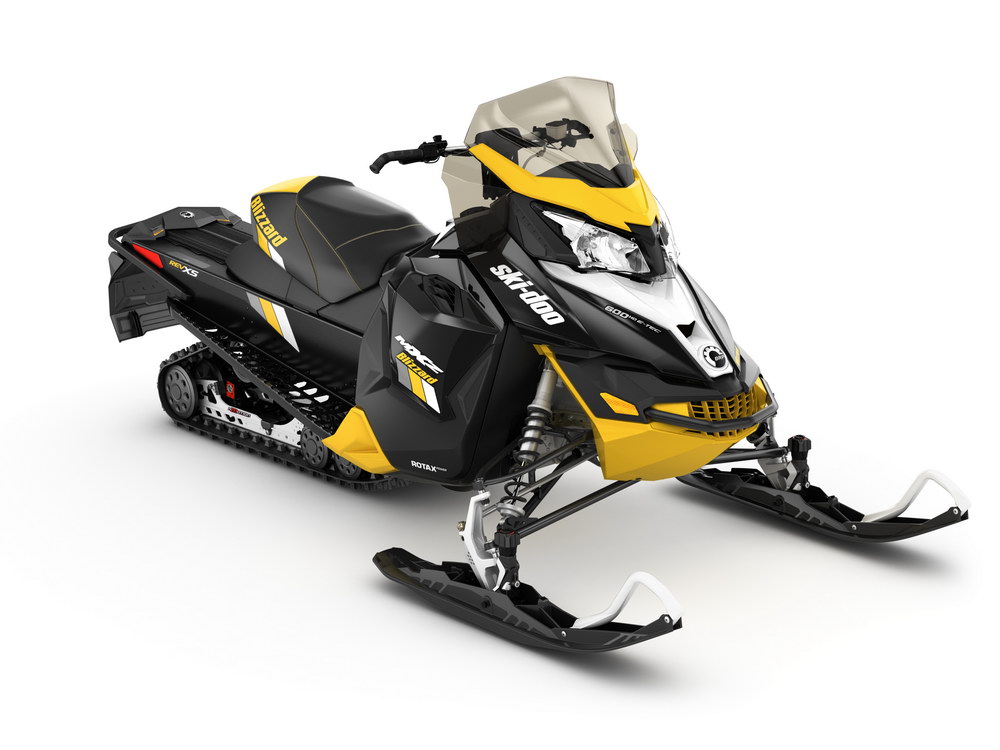 The MXZ-X-RS differs from the Blizzard, in that it includes hand guards, KYB Pro 40 piggyback racing shocks, Pilot 5.7 skis (unless ordered with the Adjustment Package). 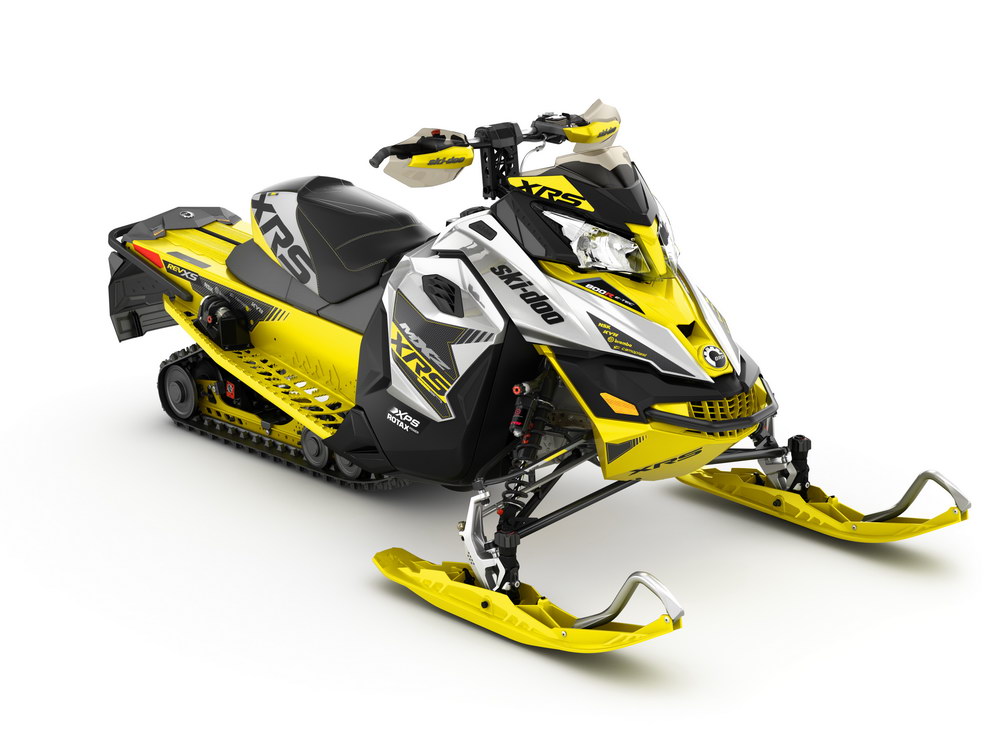 As stated from a Ski-Doo company representative, “The X-RS is still the most hard core XC sled we offer – suspension calibration and features are geared toward that rough trail performance rider that wants nothing but the most competent vehicle for rough conditions. The Blizzard offers many of the same features like the 129″ rMotion – but it’s available all year with a different windshield , look and the suspension calibration would be closer to an X or TNT model.”

The MXZ-X package includes the 129” track, hand guards, HPG Plus R front shocks and KYB Pro 36 rear, and Pilot 5.7 skis (unless ordered with the Adjustment Package). This model falls somewhere just under the X-RS and above the Blizzard, although to us it feels like it’s getting squeezed. There’s not a lot of difference between the X and the X-RS, in our opinion. Pretty much shocks, engine choice, and graphics. 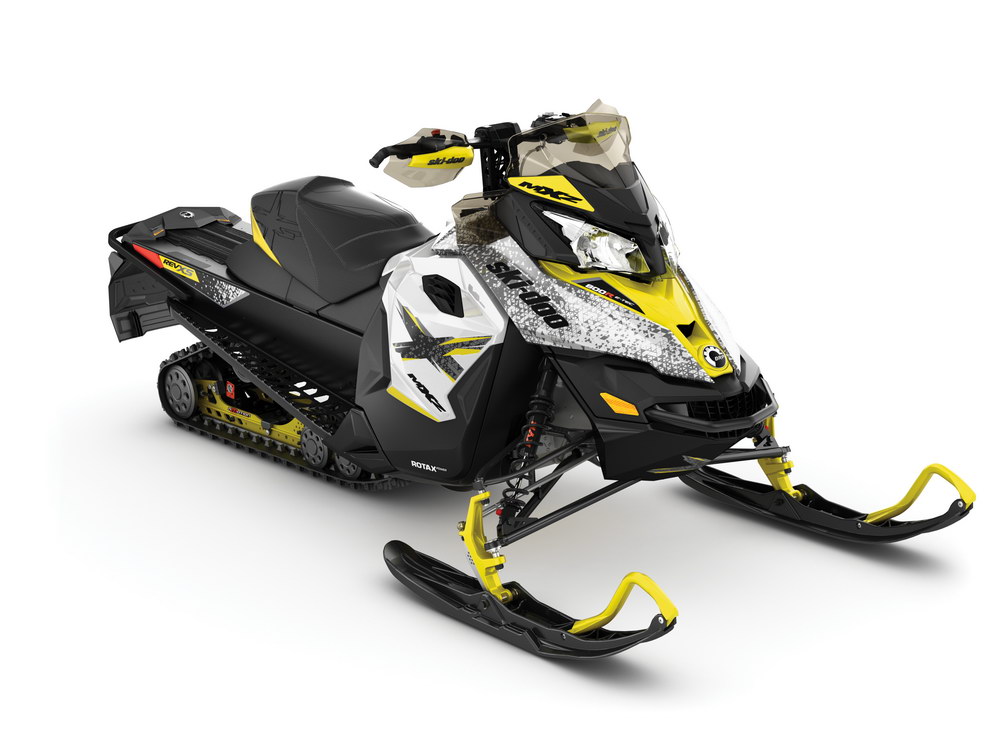 The TNT continue as the main in-season model that is very capable of giving most riders a great day on the trails and in the ditches without going all-out high tech or hard mogul mashing. The MXZ Sport offers a great sled for those on a budget with a little older suspension technology, yet on the current REV-XS platform. 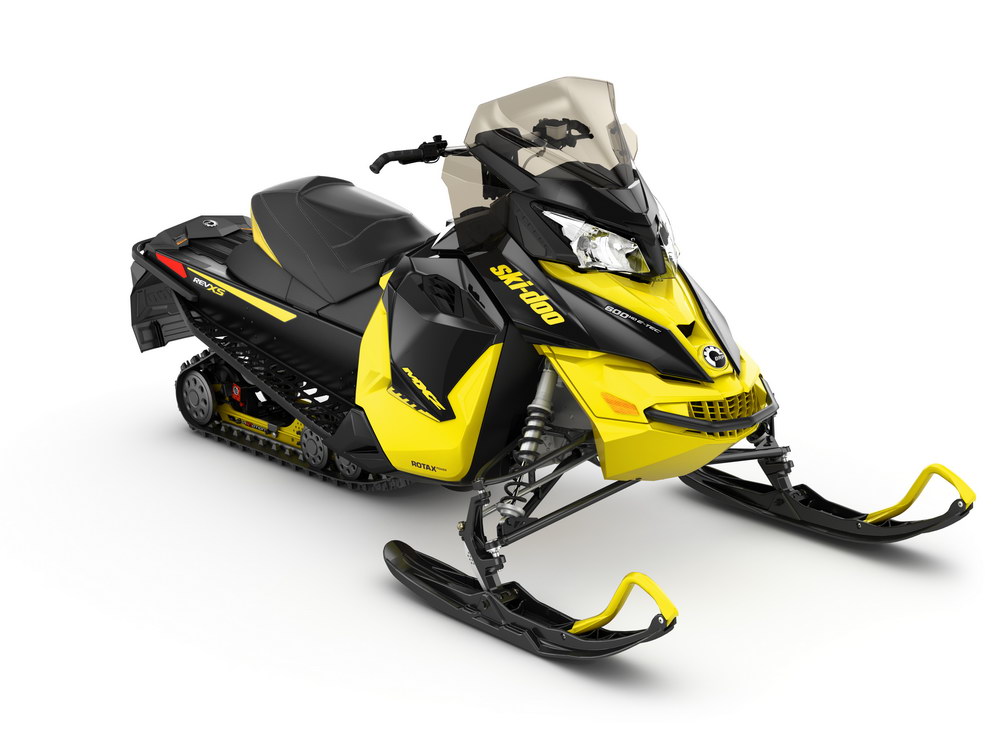 The Ski-Doo segment with the most models now grows to one more with the addition of the Renegade Enduro. Ski-Doo blazed new trail with the Renegade, and they seem to be blazing further now with the Enduro. This model is based on the adventure style motorcycles, where you ride the highways, and then ride the dirt. As our factory representative puts it, “This model was shaped after the Adventure style motorcycle: competent both on the trail and off it. The ability to travel distances, (groomed trail or off trail) and have capability to do what you want along the way is what this model is about. Do everything, and do it well.” 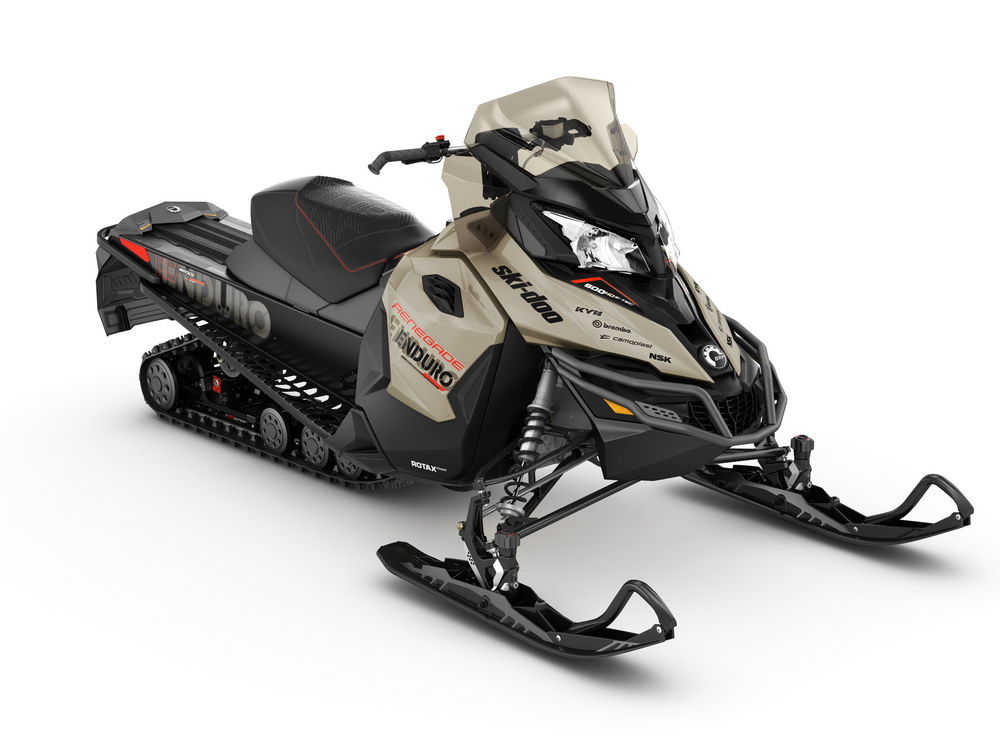 In our opinion, this is the most gorgeous sled in the Ski-Doo lineup. It is styled in the REV-XS platform with the 137” rMotion Air Ride rear suspension that can be adjusted in 5 positions on-the-fly right from the handlebar. It also comes standard with the Pilot TS skis. Available engines include the 800R E-TEC, 600 H.O. E-TEC, updated 1200 4-TEC, and the 900 ACE. The Enduro also features the XC front bumper, because you will be taking this thing everywhere.

The rest of the Renegade lineup also gets the same REV-XS treatment that only the X-RS got last year, except the Sport 600 carb. The X-RS package is made for the same rider as the MXZ X-RS, but with a longer track. The X packages deliver better shocks and latest technology for the best in performance, the Adrenaline is the mainstay in Renegade packages with great on and off trail handling, the Backcountry is designed for riders who primarily like to go off the beaten path, yet have a decent trail experience, and the Sport is designed for the budget minded, offering a great experience with a little older technology at a value price. 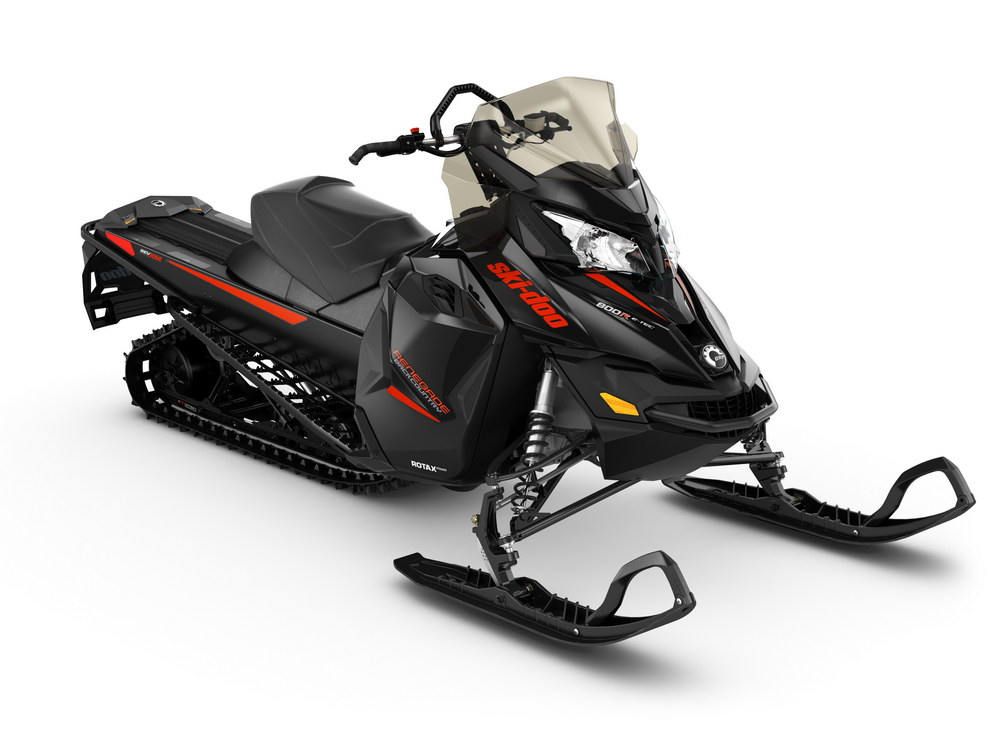 This segment continues to grow, and continues to specialize. These riders put their sleds to its limits and need it to get them home after a long day’s ride.

The new model to the foray is the Summit Burton. This model is designed for skiers and snowboarders to go where they normally wouldn’t be able to, without renting a copter. It is based on a Summit SP 154 with 800R E-TEC, and then adding a special two-passenger seat, so you and your buddy can take turns; one riding the power skis, and one slaloming on the downhill skis. A LinQ system specially designed to hold a snowboard or skis is included as well. This model was designed in collaboration with the Burton snowboard company with Burton developed coloration. 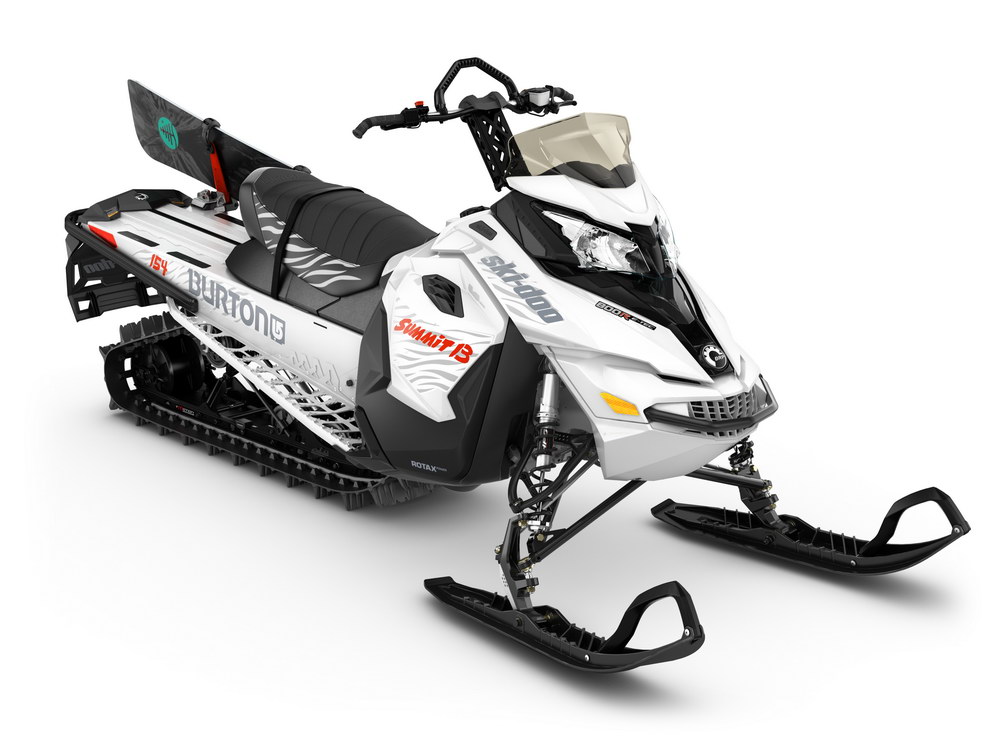 The most extreme model continues to be the Freeride. This is the “race-bred” model of the mountain segment. It includes all of the latest tech that can be found on a mountain sled by Ski-Doo. The chassis is the REV-XM RS, which adds features found on the MXZ-X-RS racer. The Freeride gets non-traditional colors each year to give it a unique and radical look. 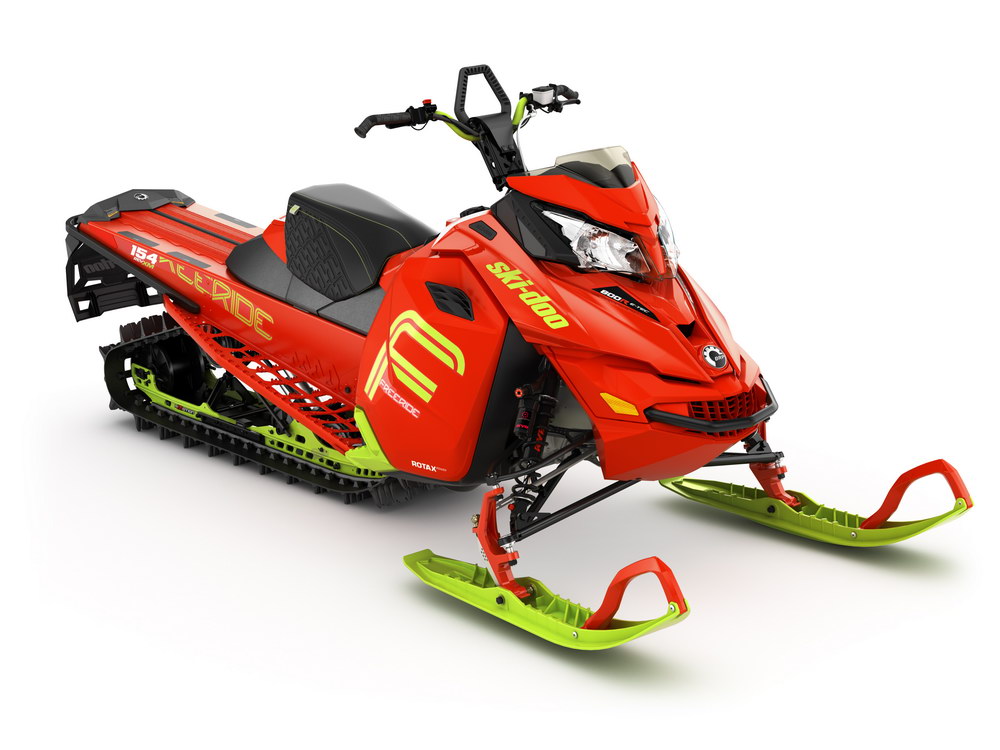 The rest of the Summit lineup looks familiar. For the ultimate in a not-so-radical mountain sled, the Summit-X package delivers again with the T3 Package and a new Matte Black/Sunburst Yellow color option. A Summit SP and SP with T3 Package is available along with updates. The SP T3 gwts the new Pilot DS 3 skis, a new chaincase, and RAS 2 front suspension, while the SP is updated with the RAS 2 as well. The Sport rounds things off for the entry-level mountain rider. 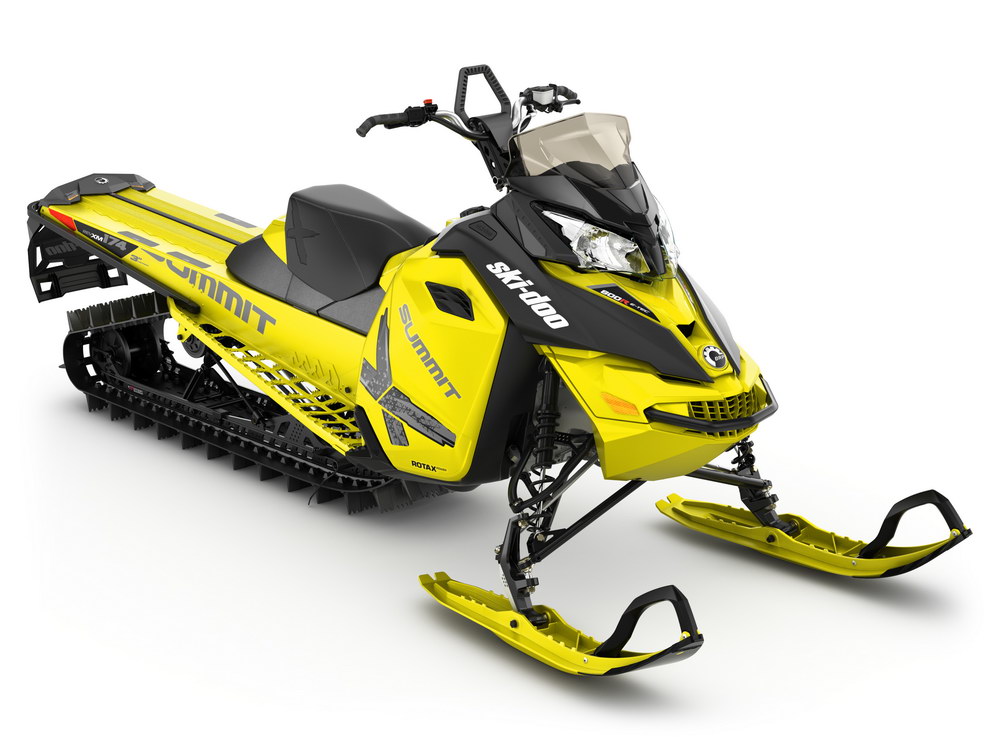 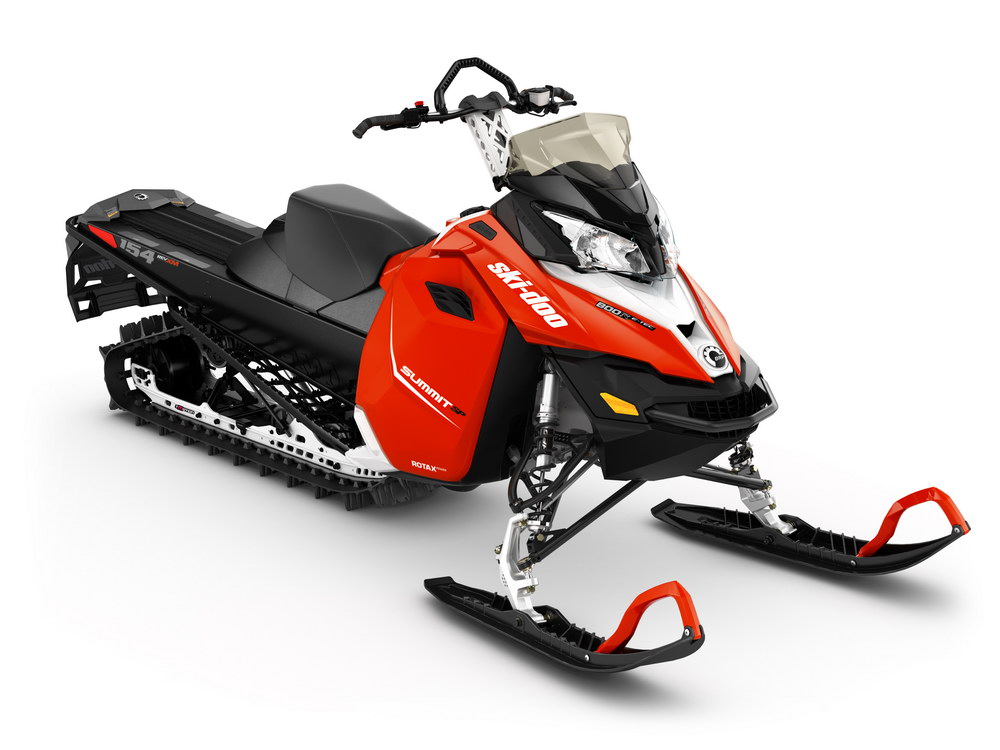 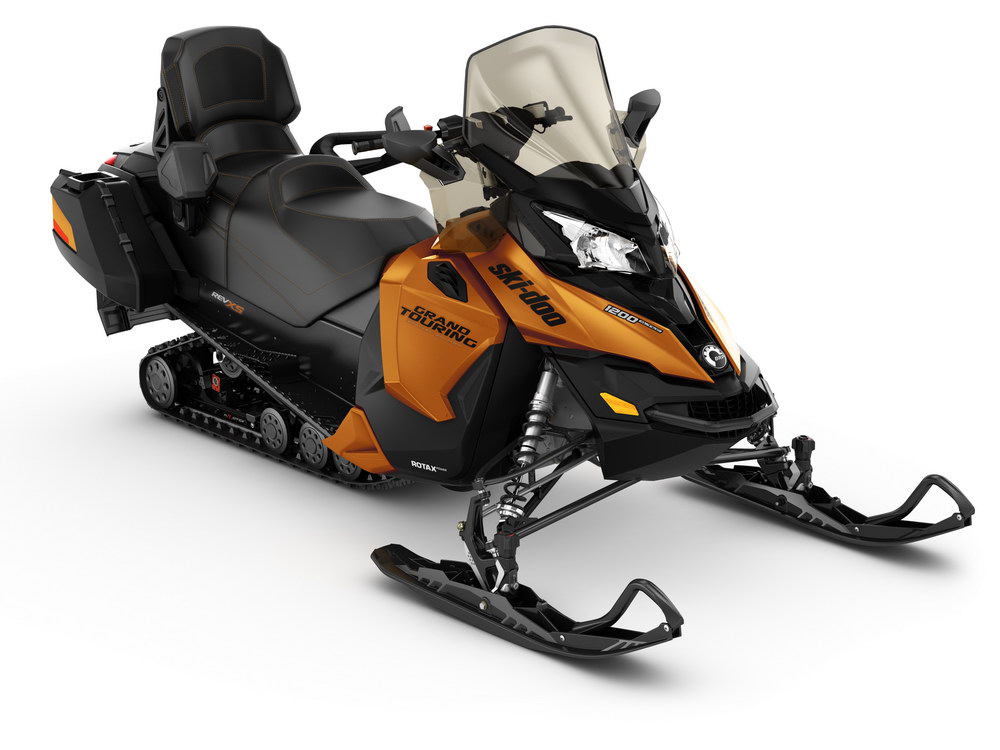 The Grand Touring has gotten a facelift in the SE and LE models. The Grand Touring SE and LE are now in the REV-XS platform and include the RAS 2 front suspension. These models also got a little higher windshield and are now a full 2 feet high. The SE also gets an Air Ride suspension and the new Pilot TS skis. 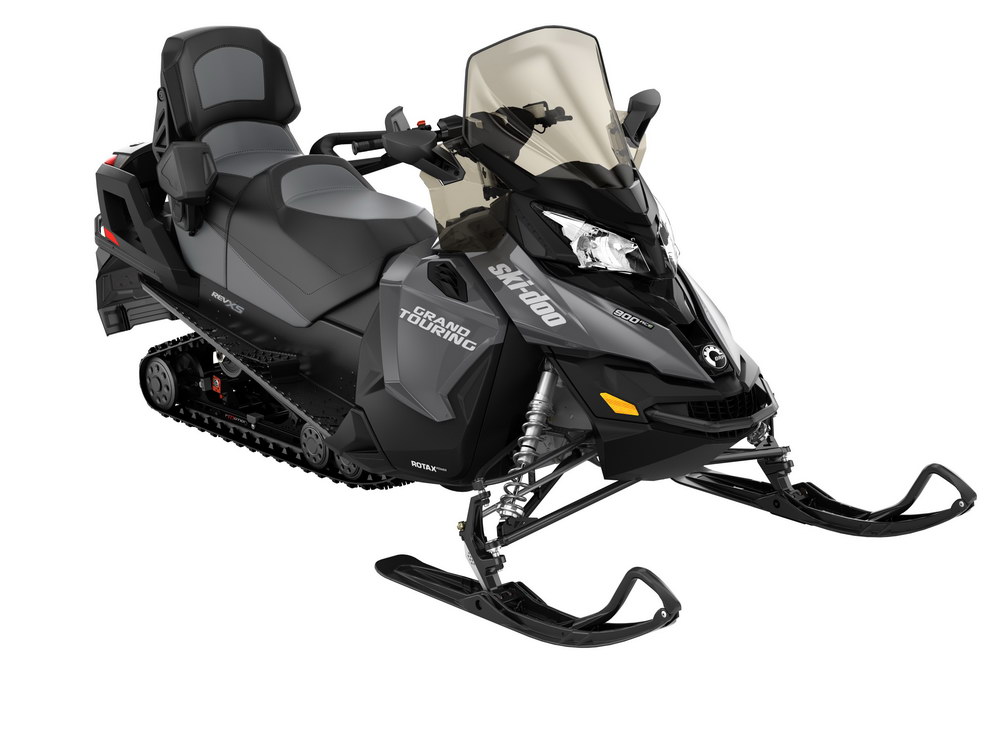 The Grand Touring has been the touring model others look up to. There are so many options and accessories for this model alone, it’s no wonder Ski-Doo continues to take market share in this area. For 2016, Ski-Doo offers a couple of rich colors that speak luxury when you see them; the SE has a new orange-ish color named Cognac and the LE has a darker grey called Tactical Gray.

The Expedition is the most versatile utility model in the Ski-Doo lineup. It can be described as the SUV of sleds, because it can haul gear on and off trail, yet provide a great rider overall. You don’t feel like you’re on a utility sled when you ride an Expedition. 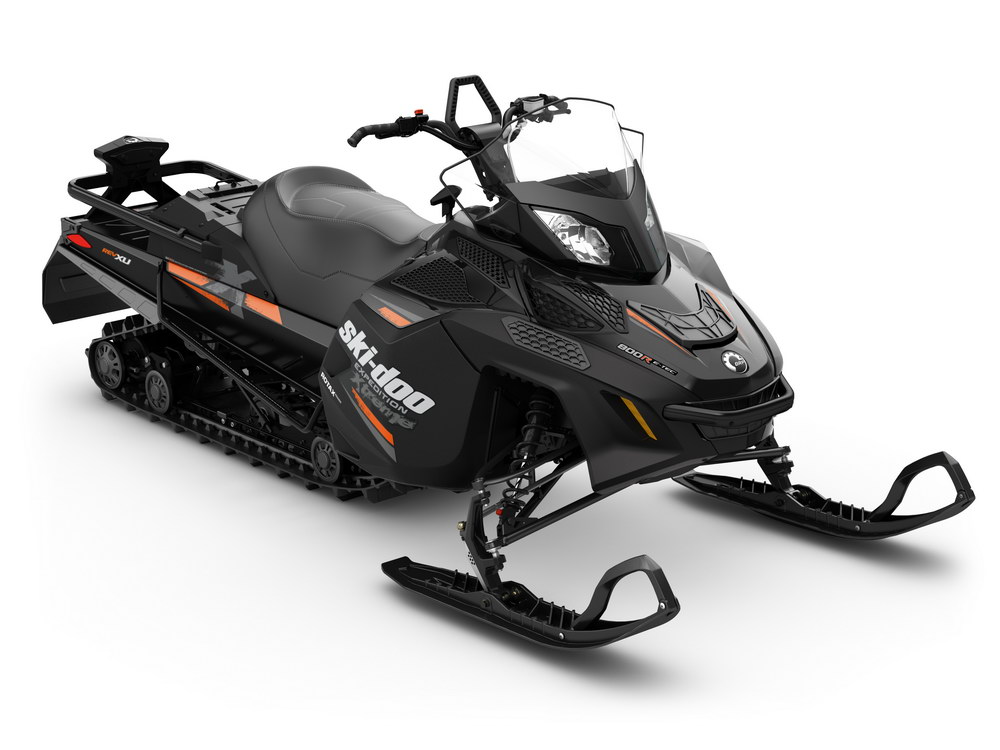 New in this segment is the Expedition Xtreme. This model is based on the LE, but with the top-of-the-line Rotax 800R E-TEC motor and KYB PRO 36 shocks in a blacked-out coloration.

The SE continues as a spring-order only model with a wide array of convenience features. The LE is the mainstay version while the Sport offers an Expedition on a budget. 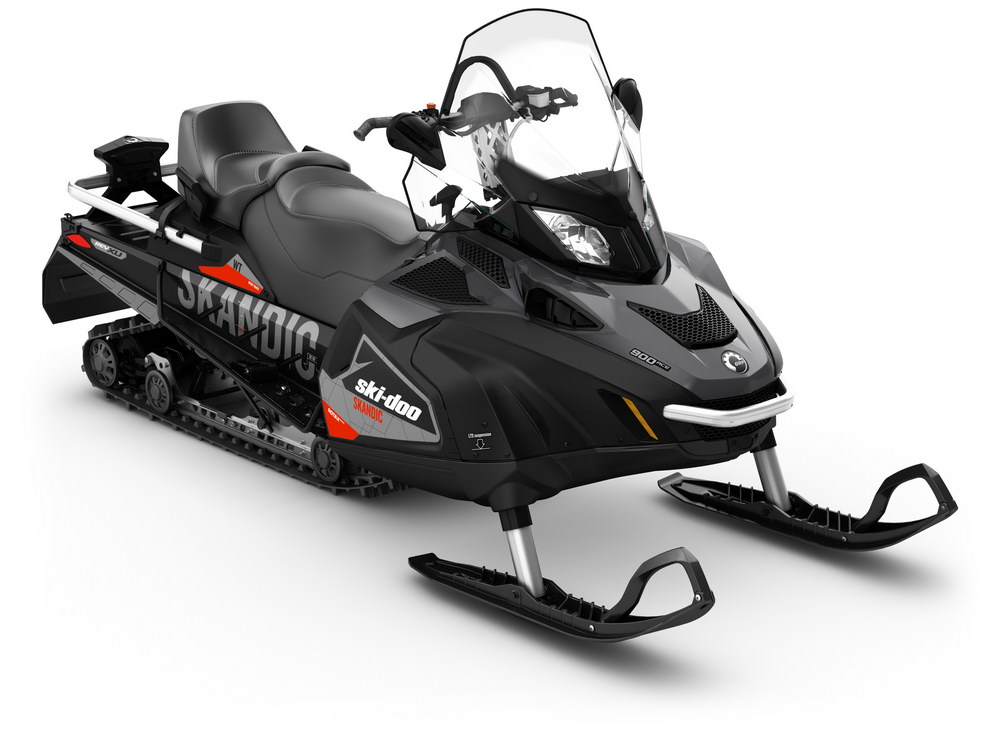 The Skandic and the Tundra continue in the lineup for those needing a work sled that gets the job done without looking utilitarian. You can have fun with them after the work is done, as well. 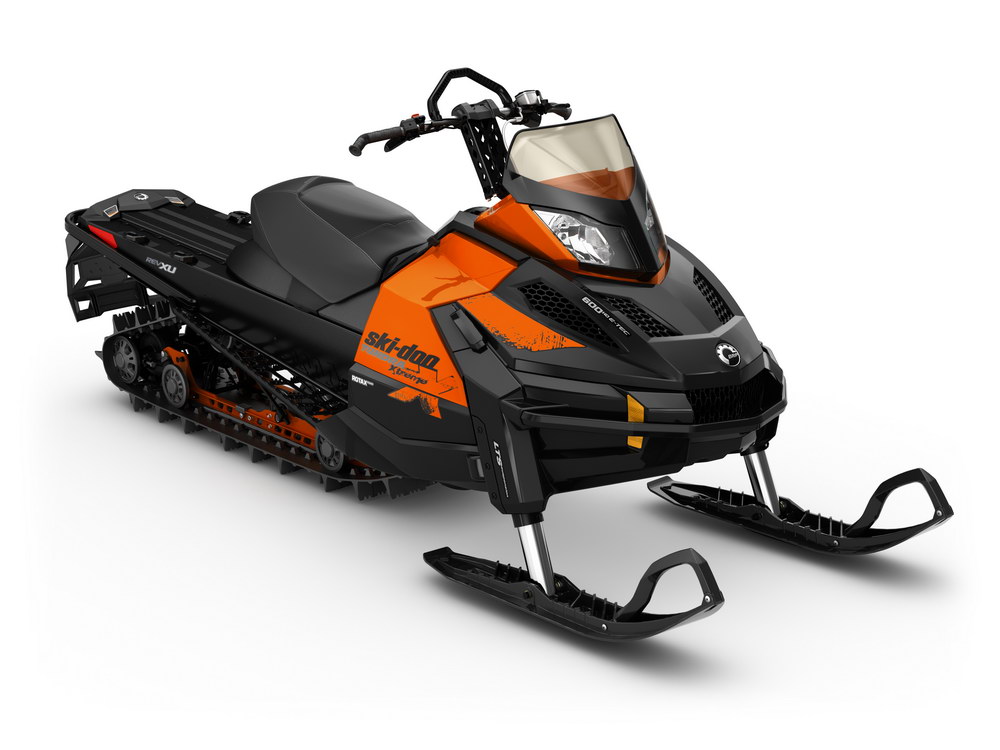 So you see, Ski-Doo continues to offer a wide range of models to fit about every niche. It might feel like there are too many models to choose from, but there are also many rider styles, and everyone seems to have their own tastes. You’ll have a little more time to decide on your next Doo-ride before the Spring Orders are over. Go to ski-doo.com to find out all the details on each 2016 model.