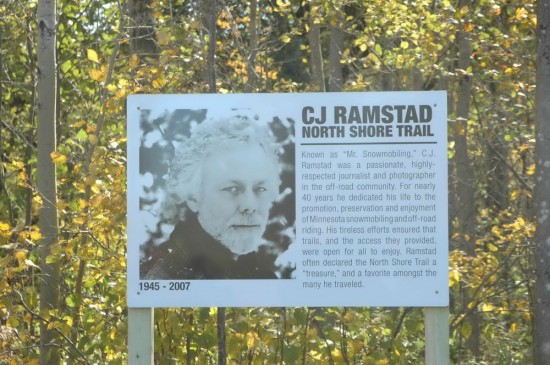 Terry Mattson, President /CEO of Visit Duluth, and longtime friend of Ramstad, said, “This is a tribute to my friend and commemorates the legacy of one of snowmobiling”s most enthusiastic advocates – C.J. captured the soul of snowmobiling with his writing and photography. Winters may come and go, but the tracks C.J. left will always remain”

Former MNUSA President Greg Sorenson initiated and lobbied for the name change, it was carried by Minn. Rep. David Dill and State Senator Tom Bakke and got a buy-in from Minnesota DNR. The state legislature agreed to approve the change only if the cost of replacing all the signage found along on the 146-mile trail from Duluth to Grand Marais, Minn., was funded by the private sector.

Sorenson recognized Dill, Bakke, the Minnesota DNR, and also his gratitude to others. “Funding for the sign change came from the C.J. Ramstad Memorial Trail Fund,” he said. “I would like to thank the members of ATVAM, MNUSA, ISOC [International Series of Champions] and MSPN for their time and donations, and a special thanks to C.J.’s family members who helped organize and manage the fund raising.”

Ramstad, the former editor Snow Week, Snowmobile, Snow Goer, Supertrax and Sledder, owner of MSPN, publisher of Minnesota Snowmobiling and Minnesota Offroad, and a motorized recreation advocate for over 40 years, died along with his son J.J. a in tragic car accident in 2007. The North Shore Trail was one of his favorite places to ride. It’s one of the few snowmobile trails in the state that bear a person’s name. The re-naming of the trail took place in 2009, but it’s now official on signage and maps.

The C.J. Ramstad Memorial Trail Fund is dedicated to preserving, supporting and expanding trails for motorized recreation. For more information or to make a donation contact Kathy at MSPN: 952-473-7870 or [email protected]