MINNEAPOLIS (November 16, 2011) — Polaris Industries Inc. (NYSE: PII) today announced the acquisition of Goupil Industrie SA, a privately owned, Bourran, France-based manufacturer of on-road, commercial electric vehicles, built on a modular design that offers many functional options and appeals to a wide variety of customers. The move will add Goupil vehicles to Polaris’ growing small electric vehicle product portfolio, while becoming part of a global brand will expand Goupil’s reach, both within and outside its existing European sales base. Goupil, which reported approximately $25 million in sales during calendar year 2010, will continue operating in Bourran with its current staff. 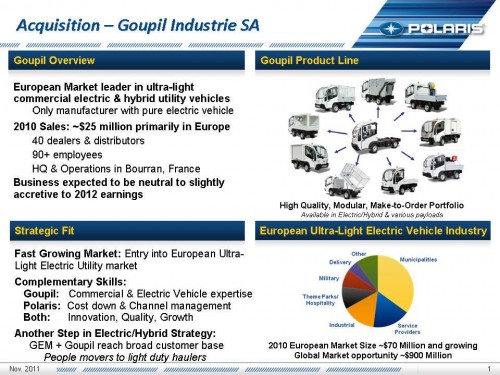 “As Polaris continues to deliver outstanding performance and gain market share in our core business, we are excited to acquire Goupil and add to our growing small electric vehicle lineup. We are eager to pursue the natural synergies between their commercial light duty work products and the more people-mover oriented offerings from our GEM business,” said Scott Wine, Polaris chief executive officer. “We see tremendous, long term growth in the global small electric vehicle market, and Goupil, with its established product line, history of profitable growth, and segment-leading European presence, will be an integral part of our strategy to realize that potential.”

“Joining Polaris presents us with the resources we require to grow into a stronger, more profitable business,” said Pascal Duclos, co-founder of Goupil. “Polaris and Goupil share similar values, as we both build upon a core of innovation and quality products. We are thrilled to become part of Polaris and look forward to expanding Goupil’s presence across all of Europe and into North America.”