As you have likely seen on the Maxsled website and Facebook page this year Maxsled helped a couple of riders in this year’s Black Woods Blizzard Tour ALS fund raiser ride.

We were glad to help in this worthy cause, putting Ike and Steve on a couple of our long term test sleds, the 2012 Yamaha Venture GT and the 2013 Polaris 600 Indy SP.  We thought you all would like to hear Ike and Steve Daughenbaugh’s ride report from the weekend.

The Black Woods Blizzard Tour, A Ride to Fight ALS is the largest snowmobile fundraising event in the world.   182 snowmobile riders with the backing of 60 sponsors participated in this year’s event which was held January 30 – February 2, 2013. Terry Steinbach, former Minnesota Twins catcher and Twins bench coach, served as host of the event for the 14th year. Also on the ride were Minnesota Twins manager, Ron Gardenhire and former Minnesota Twins, Kent Hrbek and Tim Laudner.   Terry and Kent lost their fathers to ALS. 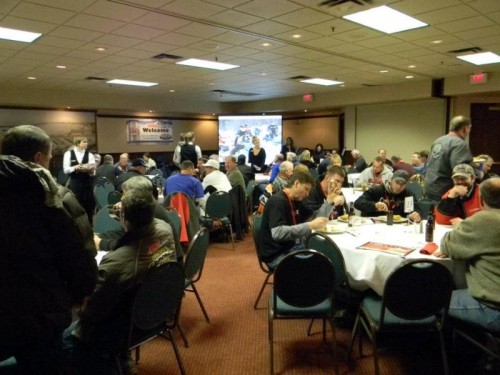 Getting the scoop on the weekend’s activities

Day One:  We arrived at the Black Woods Grill and Bar in Proctor Minnesota late on Wednesday afternoon.  Waiting for us was an army of volunteers that made organizing and checking-in 182 riders seem effortless.  To say it is well-run would be an understatement, these people know what they are doing as this is the 14th year they have held the Black Woods Blizzard Tour. That evening we enjoyed camaraderie with fellow riders and a fabulous dinner provided by The Black Woods Grill.   After dinner was the kickoff event where all the riders were brought up to speed on what to expect over the next 3 days of the ride. 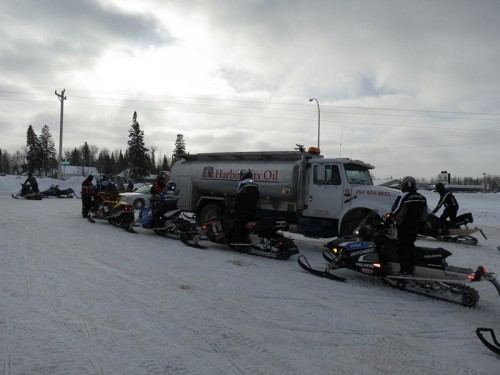 Sponsors provided gas and oil for the riders’ sleds.

Day Two:  The ride was to originate in the Duluth area on day one; however, due to marginal snow conditions the organizers made the decision to have all the riders trailer their sleds up to Fortune Bay on Lake Vermilion where the snow conditions were very good.    Despite the cold temps – it was about -10F at 9:00AM – everyone arrived early and the sleds were off, individual riding groups chose either a 70 mile or 120 mile loop.  Our group rode the 120 mile loop and every mile of the trails was flat and perfect in every respect, the trails beat our expectations in every way.  Lunch was served at the Cook MN VFW. The organization and rider support by the ALS Society is incredible; a fuel and oil truck was waiting at the VFW to top off all the sleds as was a fabulous lunch spread catered in by the Black Woods Restaurant.  That evening back at Fortune Bay, all the riders enjoyed a hospitality room followed by a wonderful dinner compliments of Fortune Bay.  As the next day’s forecast was for brutal cold a long discussion was had with the upshot that riding the next day was at each rider’s personal discretion. 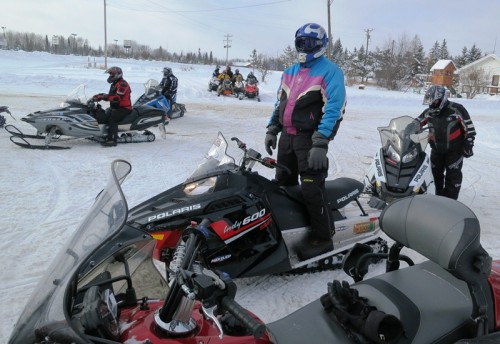 Day Three:   We awoke early, the temp was -28F and we decided that yes, we would ride.  At 7:00AM we went out to see if the MaxSled 2012 Yamaha Venture GT and 2013 Polaris 600 Indy  SP would fire up.  There was a part of us that was hoping they would not……………..both are electric start and one wondered if the little batteries would have what it took to spin them over.  Both the Yamaha and the Polaris spun over with gusto and fired right up and both ran 100% smooth the instant they fired.  Electric start and fuel injection proved their value.  Later we watched as riders without electric start pulled their ropes, it was a wonder that the ropes did not break.  One rider in our group had to pull his 800 over 31 times before it fired….no fun. 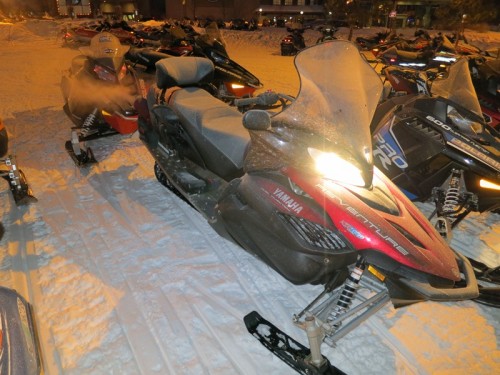 Even at -28F the Yamaha fired right up.

The majority of the riders chose to sit this day out – who can blame them, it was brutal cold.  After a fine breakfast at Fortune Bay we launched at 9:00 AM and despite the cold we had a good ride.  Every single foot of trail we were on had been groomed during the night and we were the first sleds on them, our carbides barely scratched the snow and keeping the slides cooled required a dip into fluffy trailside snow occasionally, especially for the long track Yamaha. 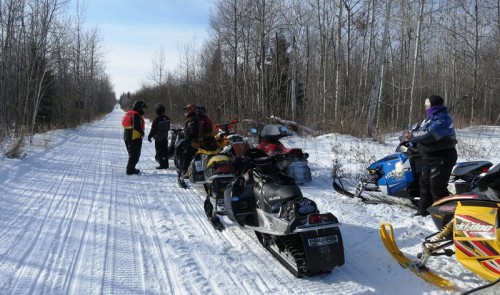 The trails were perfectly groomed and in great shape

Despite a touch of frostbite here and there we had a great ride.  When we arrived back at the parking lot at Fortune Bay there were a lot of hoods up and jumper cables in constant action, fortunately our truck had fired up before we left on the ride.    We loaded the Polaris and Yamaha on the trailer and made our way down to Two Harbors where we would be staying overnight to launch the next morning’s ride.   Dinner was once again provided by Black Woods in Two Harbors and once again the food was out of this world. 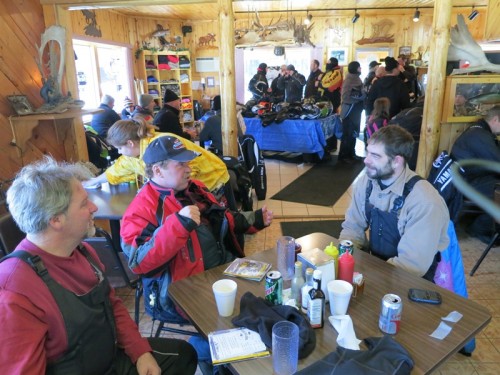 Our Place in Finland, Minn

Day Four:  We awoke to -12F in Two Harbors, after the day before this seemed pretty darn nice.   We had a quick breakfast at Black Woods and then trailered the sleds 8 miles up the hill to a parking lot right on the North Shore Trail.   The ride was on the North Shore Trail heading north to Finland, Minnesota and then back, about 80 miles.  Once again the trails were perfectly groomed and the scenery fantastic.   We stopped for a break at Our Place in Finland. 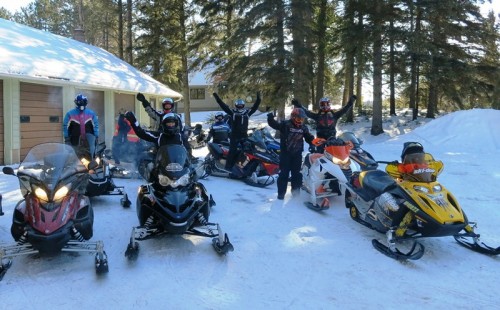 Back on the trail after a lunch break at Our Place

If you are ever in the area Our Place is a great pit stop with friendly service and good food.  As we headed back the last 40 mile segment I know all 182 riders were thinking about the positive impact the money raised will have in the lives of those with Lou Gehrig’s disease and their families.  After the last segment was done we loaded up the sleds and headed down to Duluth/Proctor to check into our hotel and get ready for the last evening of the Blizzard Tour and the celebratory banquet.

The banquet was attended by around 400 people and was held at the Cirrus Aircraft hangar at the Duluth airport.  Before dinner there was a silent auction, games and raffles as well as a live auction after dinner.   The evening was a fitting end to the Black Woods Blizzard Tour. 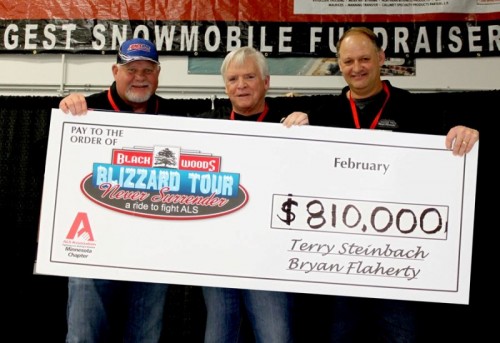 At the conclusion of the dinner it was announced that the 14th annual Black Woods Blizzard Tour had raised a new all-time record – $810,000.  This money will support the ALS Association of Minnesota/North Dakota/South Dakota to provide direct ALS care services for those with Lou Gehrig’s disease and their families as well as research for a cure.