Charles Bombardier is a concept vehicle creator who imagines new vehicles and describes the stories behind them, along with their basic engineering guidelines. Charles then teams up with unique industrial designers from around the world to draw each concept and improve them so they can be presented to potential investors. – See more at: charlesbombardier.com

This article is published with permission from Charles Bombardier. It first appeared in Globe and Mail, January 24, 2015.

Snowrama I – Nine Concepts About the Future of Snowmobiles

Do you love the feel of gliding over soft powder while astride your favorite snowmobile? Have you spent the winter helping out friends and family thanks to your trusty Ski-Doo? Whether it is outdoor sporting activities or participating in search and rescue, snowmobiles provide a critical function in our lives once snow sets in. Building off existing models and considering concerns raised by snowmobile enthusiasts, I bring you a list of nine concept ideas about the future of the snowmobile. Which one do you find interesting?

This idea was proposed to me by a general practitioner from Québec named Richard Dubois. Richard proposed developing an independent seat suspension that would have around 2 inches of travel. The snowmobile’s main suspension would thus absorb the first shock, and the seat’s suspension would absorb the aftershock. This mini suspension would be adjusted based on the weight of the driver, and its goal would be to reduce the shock transferred to your spine. 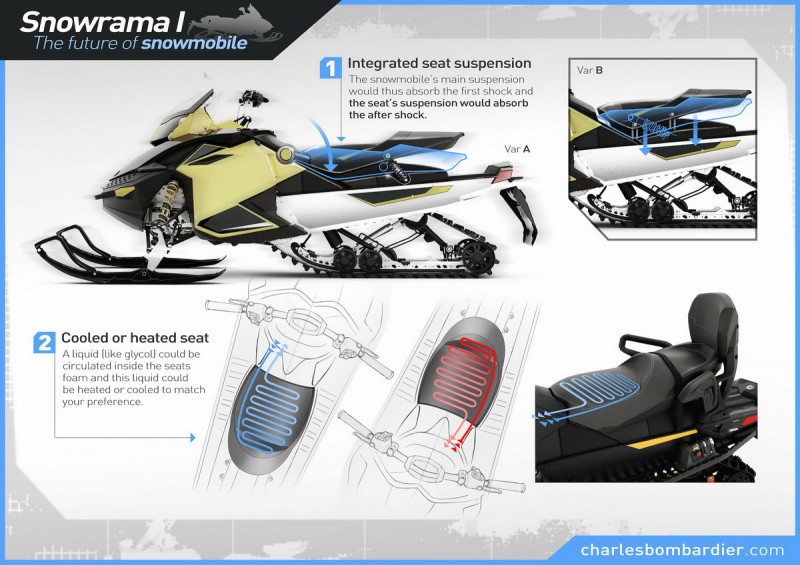 In winter, it sometimes gets really hot and snow melts on your seat… Other times, it’s really cold, and you’re freezing your butt off! Wouldn’t it be great if you could adjust your seat’s temperature in real-time? A liquid (like glycol) could be circulated inside the seats foam, and this liquid could be heated or cooled to match your preference. 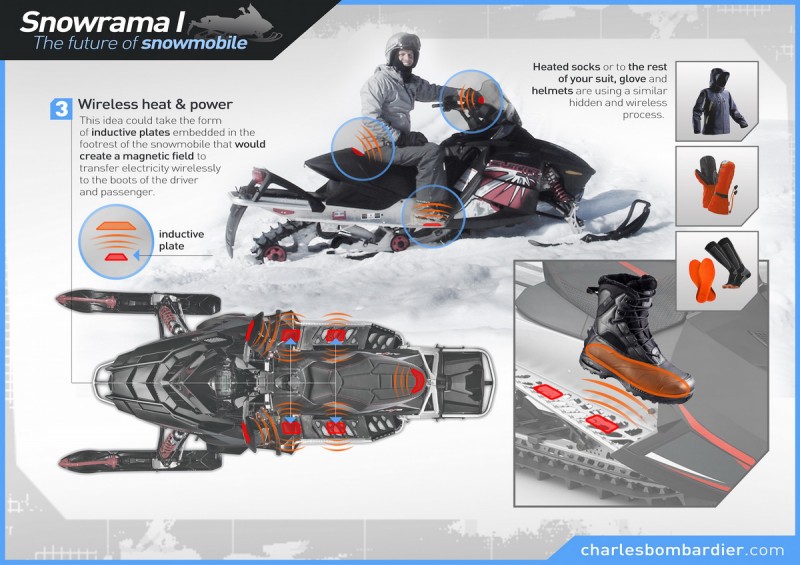 This idea could take the form of inductive plates embedded in the footrest of the snowmobile that would create a magnetic field to transfer electricity wirelessly to the boots of the driver and passenger. The boot would then use this electricity to generate heat. The electricity could also be transferred to heated socks or to the rest of your suit, gloves and helmet using a similar hidden and wireless process. This would simplify things, you would simply hop on your snowmobile and you would be powered up without any wires. This means the parts, accessories and clothing (PAC) people could offer you a host of new cool gadgets for your ride. 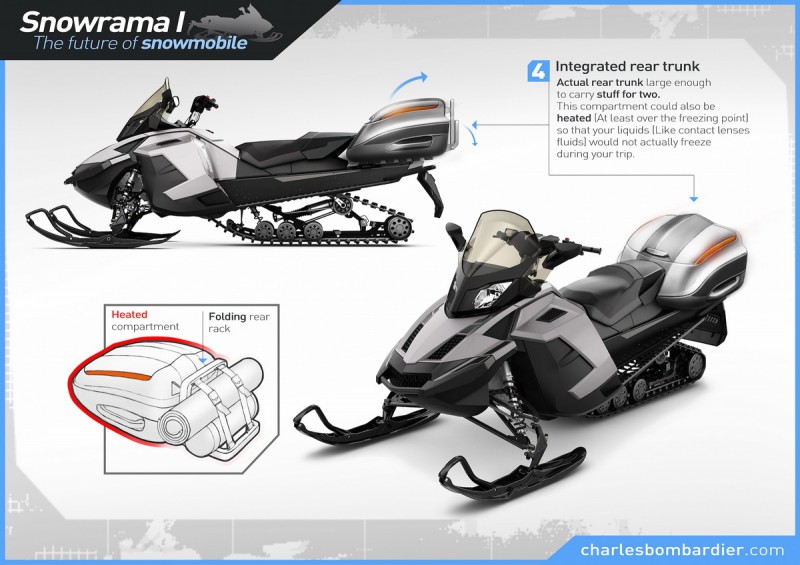 When you’re leaving for a weekend ride, there’s never seems to be enough space on snowmobiles to carry your stuff. Sure, you can buy portable bags or luggage as accessories but maybe it’s time to design a snowmobile with an actual rear trunk large enough to carry gear for two? This compartment could also be heated (At least above the freezing point) so that your liquids (Like contact lens fluids) would not freeze during your trip. With 48 inches to spare, I am sure designers can think of clever ways to integrate this. 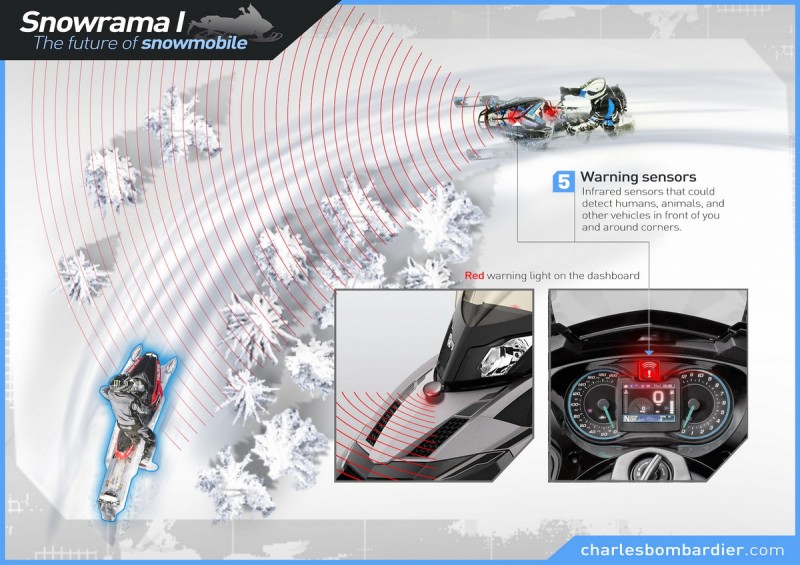 Another desirable feature would be infrared sensors that could detect humans, animals, and other vehicles in front of you and around corners. Basically, sensors in front of your sled that could detect and interpret information using the onboard computer. The results could appear on a display in the dashboard and be sent as a warning (using digital voice technology) to your helmet. 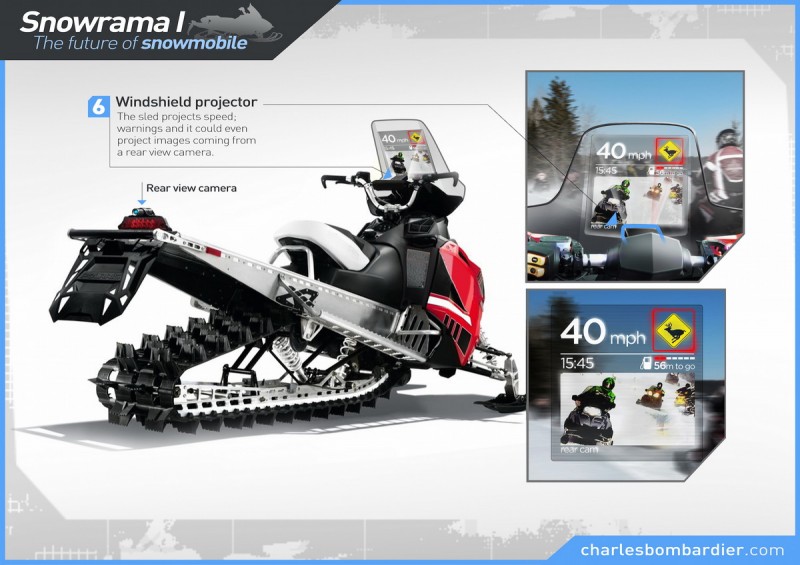 Small retro projectors are common nowadays; you can even find them on dishwashers so why not in your snowmobile’s windshield?  The sled could project speed, warnings, and it could even project images coming from a rear view camera. This camera could be embedded into your helmet and be linked via Bluetooth to your snowmobiles’ projector. 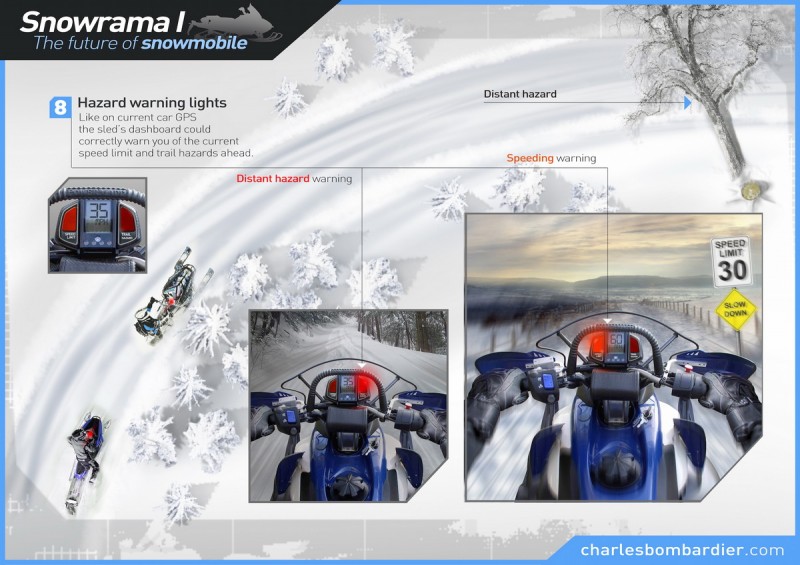 Trail speed limits vary, and if you are riding on a new trail you might miss the speed limit sign or other trail hazards (like something blocking the trail). Like the dashboard of a car, the sled’s GPS dashboard could warn you of the current speed limit and trail hazards ahead. A red warning light could also start blinking on the dashboard or on the windshield to grab your attention let’s say if the driver is speeding past a certain threshold. I know this feature might not be popular with speed junkies, but it could save lives and reduce injuries. 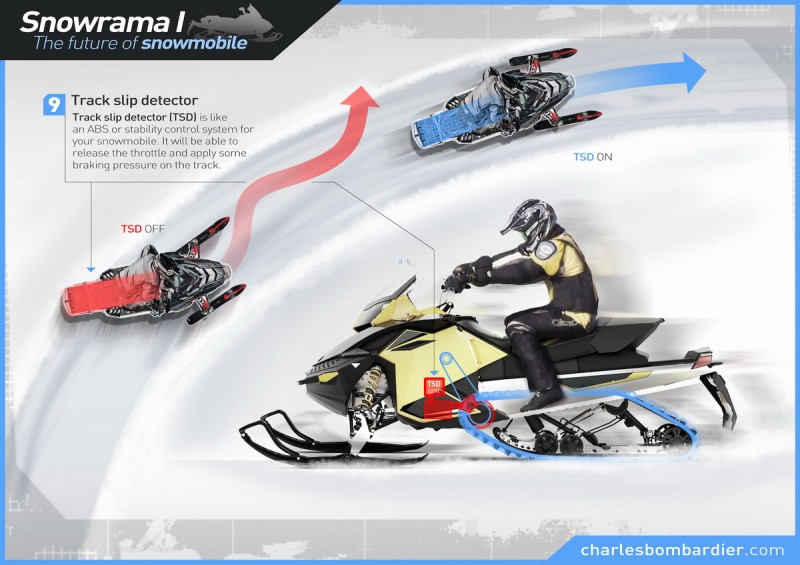 Track slip detector (TSD) is a system that monitors the speed and acceleration of the track along with the angle of the skis of the snowmobile and its lateral acceleration. It then determines if the snowmobile is currently spinning its track on a curve (on ice) and if it’s going to oversteer if the pilot continues to apply power on the track. This feature is like an ABS or stability control system for your snowmobile. It will be able to release the throttle and apply some braking pressure on the track.

It’s fun to enter a curve and spin it, but it’s really not fun to overdo it and have your track side crash into a snow bank or tree because you pushed it too hard. I agree if you’re an experienced rider, you don’t need this but you can probably picture it on a rental snowmobile or a button you activate when you let someone else drive. Furthermore, it’s not cool for other riders when you spin too much in a curve because you remove the snow and you polish the ice under the trail making it progressively more slippery. The TSD would aim to reduce this. 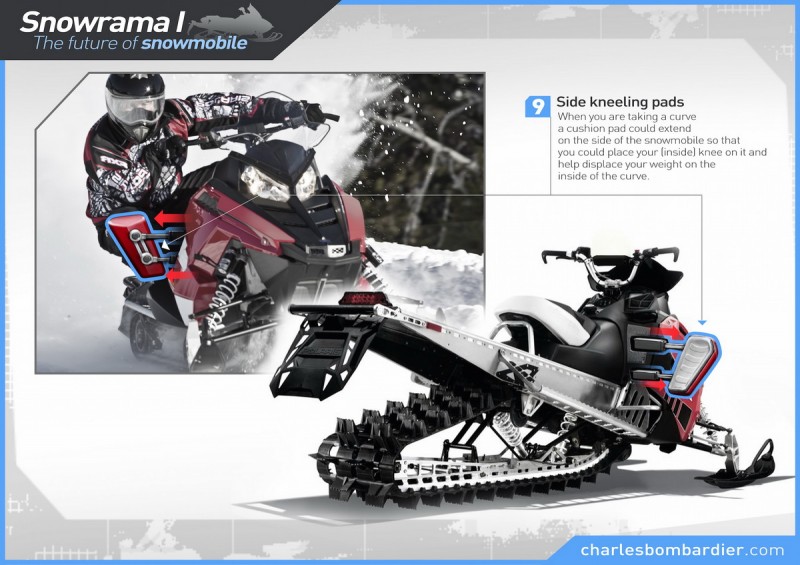 Comfort and control are some of the top issues raised by snowmobile drivers in my research. These suggestions for future additions modeled off current technology would increase safety and convenience while you are negotiating the landscape. If you have thoughts on these concepts – or have your own to share – don’t hesitate to reach out. Nextgen snowmobiles are just an idea away.

The Snowrama renderings were produced by Jan Metelka, who is located in the Czech Republic. Jan studied at the Academy of Arts, Architecture, and Design in Prague. He has also created the images for the Subplane, the Watrix hydrofoil watercraft, the Phantom 1 driverless racing car.

What do you think of these ideas? Would you like to see more? Send us some feedback below.